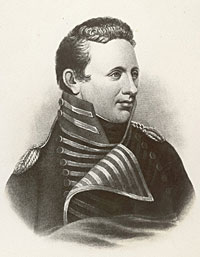 On September 23, 1805, twenty-six year old United States Army Lieutenant Zebulon Pike signed the first treaty between the Americans and the Dakota Indians.  At the time there was almost no American presence in the northern region and it was Pike’s mission to change that.  The young Lieutenant’s objectives included establishing friendly relations with the Dakota’s and Ojibwe’s, scout out suitable sites for military and trading posts, negotiate permission from the Indians to build on those sites, to gather intelligence about the scope and value of British trade in the region, and finally to locate the source of the Mississippi.

Establishing friendly relations with the Dakota and negotiating permission to build on suitable trading sites proved easy.  The Dakota welcomed the Americans as another trading partner, something that would increase competition and therefore act toward their advantage.  In giving up their land, they considered it no loss because, as the treaty stated, the Dakota retained the right to “pass and repass, hunt, or make other uses of the said districts as they have formerly done.”

The remainder of Pike’s expedition was not quite so easy.  As Pike and his company continued north, they had know way of knowing the hardships that awaited them during winter travel.  In a letter to an American General, Pike complained of the cold being so severe that it froze the ink in his pen.  The men set up winter camp near Little Falls, but had to rely on the hospitality of the North West Company traders.  When Pike continued his journey northward, the difficulties proved too much and Pike gave up, declaring Leech Lake as the the source of the Mississippi.

Pike was also unable to establish any sort of American dominion over the northern British presence.  Although British officers paid Pike and his company lip service, they made no attempt abide by Pike’s unenforceable directives.  In the end, Pike could not achieve all of his objectives and wrote in his journal that he and his company had been through “as many hardships as almost any party of Americans ever experienced by cold and hunger.”

However, the Sioux Treaty of 1805 proved to be vitally important toward establishing an American presence and led to the erection of Fort Snelling in 1819.  Below you will find the terms of the treaty:

Art. 5  The Sioux Treaty of Sept. 23, 1805 – Whereas, at the conference held between the United States of America and the Sioux nation of Indians; Lieutenant Z.M. Pike, of the army of the United States, and the chiefs and the warriors of said tribe, have agreed to the following articles, which, when ratified and approved of by the proper authority, shall be binding on both parties.

Art. 1.  That the Sioux nation grant unto the United States, for the purpose of establishment of military posts, nine miles square at the mouth of the St. Croix, also from below the confluence of the Mississippi and St. Peters up the Mississippi to include the falls of St. Anthony, extending nine miles on each side of the river, that the Sioux nation grants to the United States the full sovereignty and power over said district for ever.

Art. 2.  That, in consideration of the above grants, the United States shall pay (filled up by the senate with 2000 dollars.)

Art. 3.  The United States promise, on their part, to permit the Sioux to pass and repass, hunt, or make other use of the said districts as they have formerly done without any other exception than those specified in article first.