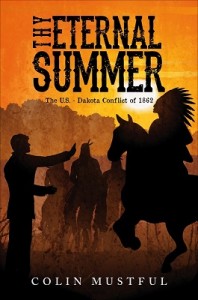 Being a self-published author is a long, learning process.  My first novel, Thy Eternal Summer, was published by Tate Publishing in 2013.  Since its publication I have learned a few things.  Firstly, that my novel was not geared toward my target audience of students and educators.  Secondly, that not all publishing contracts are the right fit.  With this new knowledge, I terminated my contract with Tate Publishing and republished the novel under a new title, Fate of the Dakota.

The content of the two novels are essentially the same with a few revisions.  Those revisions were made with consideration toward my target audience and consideration toward the sensitivity of the material.  For instance, in Thy Eternal Summer I use the terms “hostile” and “friendly” when defining opposing sides of the Dakota people.  In Fate of the Dakota I have defined opposing sides as either “farmer” or “traditional” or by saying, “those in favor of war” and “those opposed to war.”  With that in mind, I also attempted to describe factionalism among the Dakota and why it existed.  The fact is, it was much more complicated than just those in favor or against war and I have tried to indicate and define that to readers.

It is my hope that by republishing this novel, I have loudly identified my audience (those seeking knowledge about the U.S. – Dakota War of 1862) and that I have more thoughtfully and thoroughly considered the complexity and sensitivity of this history.