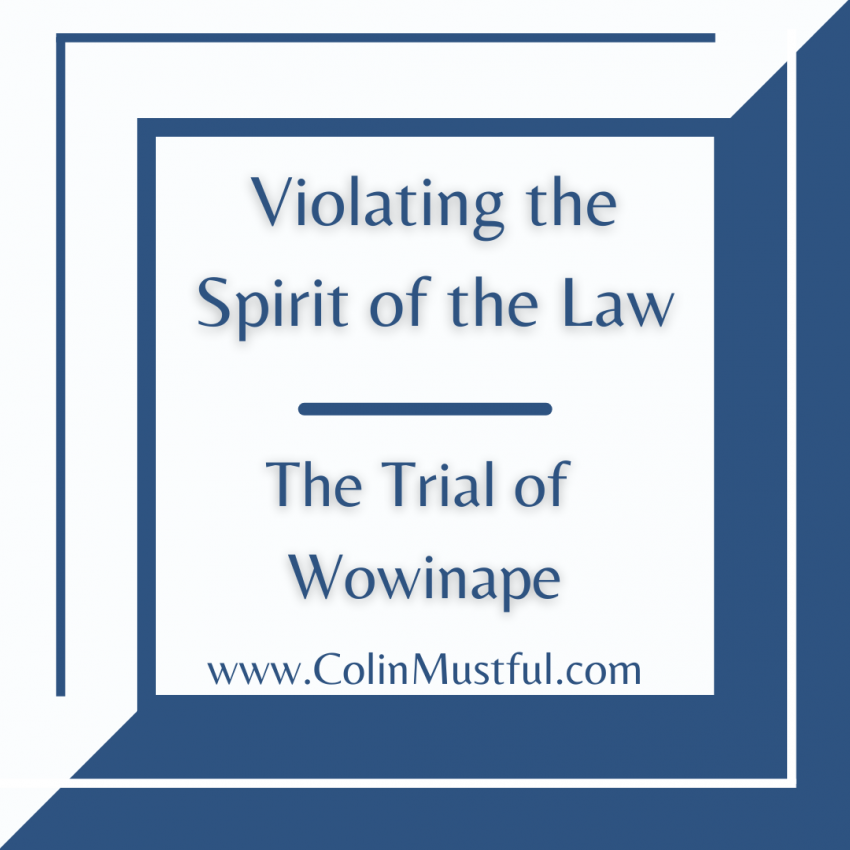 On July 3, 1863, Nathan Lamson and his son Chauncey discovered a Dakota man and his son in a raspberry thicket outside of Hutchinson, Minnesota. Aware that there was a $500 bounty on Indians, Lamson took aim and shot at the Dakota man. After a brief exchange of gunfire, the Dakota man lay dead and Lamson lay injured. While Lamson’s son, Chauncey, ran to town for help, the son of the Dakota man placed new moccasins on his father’s feet for his journey into the spirit world, folded his arms, and carefully wrapped him in a blanket. He then walked alone to the north.

In the aftermath of the U.S. – Dakota War of 1862, after seeing hundreds of their neighbors and friends killed by Indians, fear and a thirst for revenge dominated the white settlements of Minnesota. In that spirit, the people of Hutchinson rejoiced at the death of the Dakota man killed in the raspberry patch. They dragged his body through the streets, set off firecrackers in his nostrils, and severed his head from his body. That man, the people later learned, was Taoyateduta—Little Crow—the leader of the Dakota War effort less than a year earlier. The boy who got away was Wowinape, Little Crow’s sixteen-year-old son.

In late August, Wowinape was captured by General Henry Sibley’s soldiers, who described the boy as “half-starved and nearly naked.” Sibley quickly established a military commission at Fort Abercrombie to put Wowinape on trial. The charges and proceedings mirrored those of the military commission that tried and convicted hundreds of Dakota men in October 1862. During Wowinape’s brief trial, several witnesses said they had seen the teenaged boy at the second battle of New Ulm and at the fighting outside Hutchinson. Others declared that after his capture they heard Wowinape admit that he had returned to Minnesota with his father to steal horses. Wowinape’s trial concluded on September 28, 1863, ending in a guilty verdict and he was sentenced to death by hanging.

The verdict was approved by the head of the military commision, Henry Sibley, and then sent to Major General John Pope in St. Paul, who forwarded it for final approval to Secretary of War Edwin Stanton and Judge Advocate General Joseph Holt. However, Holt declined to review the trial citing an 1861 statute that required “the General Commanding the Army in the Field to confirm or disapprove the proceedings.” In other words, Holt told General Pope that it was his job to determine the fate of Wowinape.

During and after the Dakota War, Pope expressed an eagerness to exterminate the Dakota people. However, when tasked with reviewing the trial and sentencing of Wowinape, Pope argued that he had no legal authority to confirm the sentence. He also cast doubt on the proceedings by citing Article 65 of the Articles of War which stated that the convening officer, in this case Henry Sibley, could not also be the “accuser or prosecutor.” If the same rationale were applied to the Dakota War trials that took place in the fall of 1862, every one of the 392 cases would have been invalidated.

In a letter to Judge Advocate General Holt, Pope noted that the proceedings against Wowinape were “in violation of the spirit of the 65th Article of War, but [that] there . . . [was] a possible doubt.” Holt agreed, and shortly thereafter Pope disapproved Wowinape’s death sentence. Instead, Little Crow’s son was imprisoned at Camp McClellan with the prisoners from the Dakota War. He remained there until 1865 when he was pardoned. Later, he converted to Christianity and changed his name to Thomas Wakeman. He resettled in Flandrau, South Dakota and helped to organize the first Native-run YMCA. He died of tuberculosis on January 13, 1886.

Want to Learn More? Check out my Historical Novels about the U.S. – Dakota War of 1862 and its Related History – https://colin-mustful.square.site/

Colin Mustful is a Minnesota author and historian with a unique story-telling style that tells History Through Fiction. His work focuses on Minnesota and surrounding regions during the complex transitional period as land was transferred from Native peoples to American hands. Mustful strives to create compelling stories about the real-life people and events of a tumultuous and forgotten past. To schedule an event or interview, email the author at mnauthor@colinmustful.com