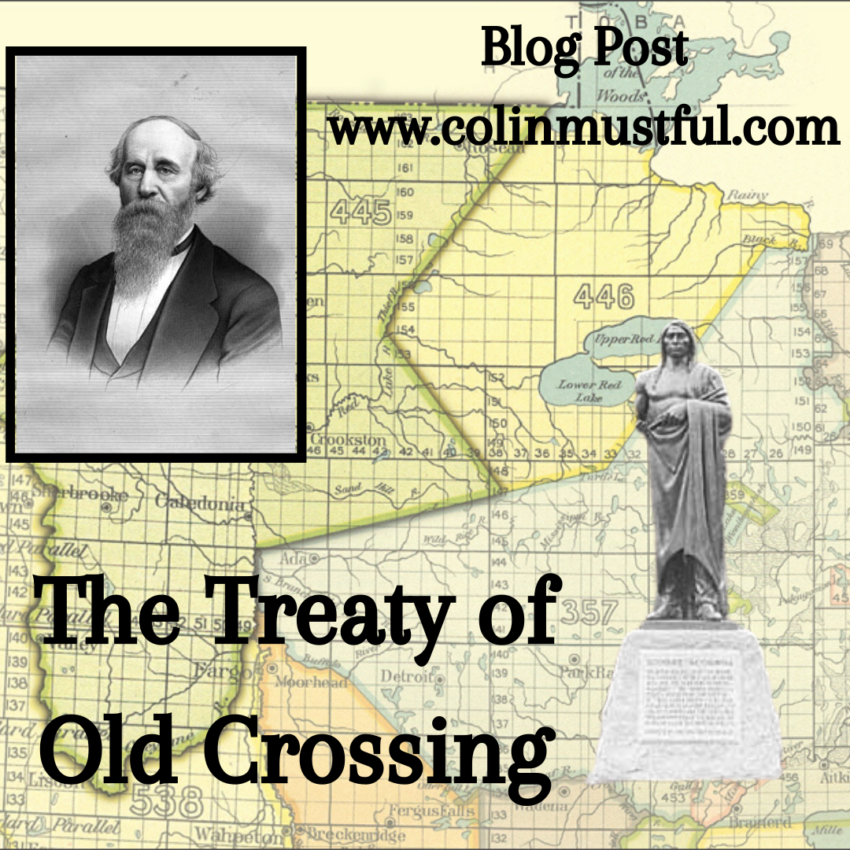 The Treaty of Old Crossing was signed October 2, 1863, at the “Old Crossing” of the Red Lake River near present day Huot, Minnesota. It was negotiated between the United States government and the Pembina and Red Lake Bands of Ojibwe. The original treaty ceded approximately 11,000,000 acres of land in northwestern Minnesota and northeastern Dakota Territory to the United States in exchange for $20,000 paid annually for twenty years, $100,000 paid out to traders for debts and depredation claims, and smaller amounts of money were to be set aside for various other services and implements. Additionally, according to the wording of the treaty, one-hundred sixty acres of land was to be provided “each male adult half-breed or mixed-blood . . . who has adopted the habits and customs of civilized life.”

The treaty that was signed October 2, was not the first attempt to obtain the Red Lake and Pembina Ojibwe lands, nor was it the final agreement. Twelve years earlier, immediately following the treaties of Traverse des Sioux and Mendota, a treaty was negotiated at Pembina for the cession of five million acres of land surrounding the Red River Valley. That treaty was negotiated by Alexander Ramsey, who was then Minnesota’s Territorial Governor, and signed on September 20, 1851. However, the treaty was never ratified by Congress as a concession for those southern Congressmen who sought to prevent or delay the addition of a free state to the Union.

Urged on by traders, railroad interests, and steamboat proprietors, another attempt at negotiating the Red River land cession was planned and organized for August of 1862. In mid August of that year, a huge supply train that was headed for Pembina and preceded U.S. negotiators reached Fort Abercrombie. Meanwhile, on August 25, a large number of Pembina and Red Lake Ojibwe gathered at the mouth of the Red Lake River as instructed. But, after the outbreak of the U.S. – Dakota War, U.S. negotiators, fearing travel was unsafe, canceled negotiations. The Ojibwe waited many weeks, consuming their rations and trade goods, before returning to their homes. The consumption of goods and rations were counted against them in later negotiations.

Because of the failed treaty in 1862, Ramsey was anxious to reopen treaty negotiations the following year. With the help of Episcopal Bishop Henry Whipple, negotiations were set for September of 1863 at the “Old Crossing.” The much anticipated occasion was preceded by a supply train of two hundred and ninety men, three hundred and forty mules, one hundred and eighty horses, fifty-five oxen, and ninety vehicles that reached the crossing on September 21, 1863. A week later, after Ramsey and co-commissioner Ashley C. Morrill arrived, it is reported that there were present 579 Indians and 24 half-breeds of Red Lake, and 352 Indians and 663 half-breeds of Pembina.

The initial proposal was rejected by the Ojibwe bands and treaty negotiations were tense. It has been noted that Ramsey set up a Gatling Gun aimed at the assembled bands and that, according to historian Ella Hawkinson, “the white men made threatening speeches, in an irritated tone, calculated to break down the Chippewa’s tenacity.” On October 1, Ramsey recorded in his diary that, “To day it looked as if all hope of success was gone . . .” But, after negotiations renewed the next day, a deal was made and the treaty was signed October 2, 1863. However, sources argue that U.S. negotiators intentionally misrepresented the purpose of the treaty as merely seeking “right of passage” rather than land cessions. Bishop Whipple wrote that the treaty was “from beginning to end a fraud.”

Regardless, the treaty underwent numerous amendments in Congress because they believed it was too generous to the chiefs. Several of the original signatories refused to sign the amended treaty. However, after further negotiations led by Bishop Whipple and a delegation of Ojibwe which were held in Washington D.C., a revised treaty was agreed upon and signed on April 12, 1864. The supplemental treaty reduced the annual payment from $20,000 to $15,000, but allocated funds specifically between the Red Lake and Pembina bands, and included more provisions such as those for a sawmill, and to furnish a blacksmith, physician, miller and farmer.

Ultimately, the Treaty of Old Crossing was just one of many land cession treaties of the time period that supported the colonial, capitalistic advancement of the white American population while further suppressing Native culture and land rights. It was advocated by politicians and businessmen, who, in collaboration with one another, used their positions of power and influence to obtain and expand their political and economic advantages. Today, we have come to acknowledge this legacy of unethical colonial domination while struggling with how to reinterpret and reconcile this inheritance.