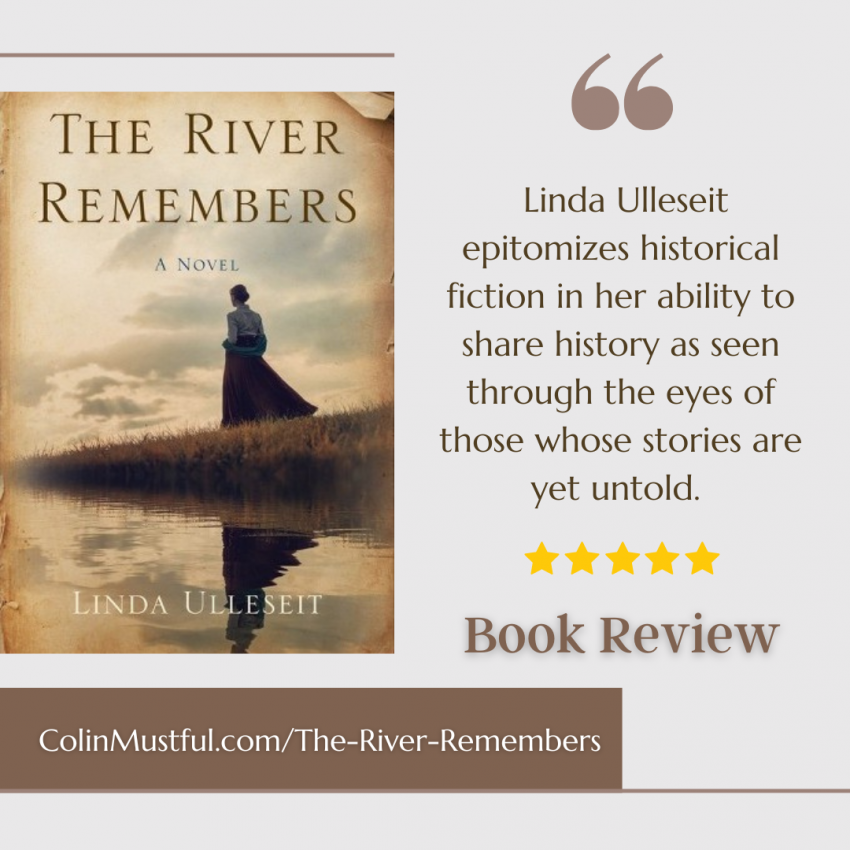 A heartbreaking but honest look at the lives of three women in the not-so-distant past, A River Remembers by Linda Ulleseit epitomizes historical fiction in its ability to share history as seen through the eyes of those whose stories are yet untold.

The novel opens with Samantha Lockwood and her brother, James Henry, as they arrive in the frontier town of Prairie du Chien. The year is 1834 and Samantha is a young woman who traveled all the way from New York state to escape the expectation that she would marry James Churchman, an up and coming politician that by Samantha’s own words, “bored her to tears.”

Next we meet Day Sets, a Dakota woman living in Eatonville on the shores of Mde Make Ska, a lake just west of Fort Snelling. Eatonville was created years earlier by the region’s Indian agent, Lawrence Taliaferro, as a means of acculturating the Dakota into white, Euro-American style living. It was called Cloud Man’s Village or Ȟeyáta Othúŋwe by the Dakota. Days Sets is daughter of Cloud Man and the wife of Agent Taliaferro whom she and the Dakota call Iron Cutter. Together they have a daughter named Mary.

Lastly, we meet Harriet Robinson, a fourteen-year-old girl brought to Fort Snelling as an enslaved person owned by Major Lawrence Taliaferro’s wife, Eliza. Harriet works in Major Taliaferro’s home alongside her fellow enslaved women, Ellie and Hannah, and one very playful Newfoundland dog named Nero. Born at a Virginia plantation, Harriet was sold at eight-years-old to the Dillon family of Pennsylvania. When their daughter, Eliza Dillon, married Lawrence Taliaferro, Harriet was given as a gift to the bride and brought with Eliza to Fort Snelling in the so-called “free territory.”

After introducing the characters, the story continues by alternating points of view in each chapter as seen through the eyes of these three women. Ulleseit’s approach has two main advantages: First, it provides the author three distinct social classes through which the world is filtered; and second, it shows the world through the eyes of women, a group whose viewpoint has been ignored by history for far too long.

As a historian, I was impressed with the breadth of research Ulleseit did to fill in all the details for this novel. 1834 was a pivotal moment in the history of the region and it involved a huge amount of people, events, and instrumental proceedings. Not a page goes by that the author does not include some fact or detail relevant to the course of history. Some are miniscule, and must have been difficult to sift out through the research. Others are major and therefore were not overlooked.

But Ulleseit does not hit the reader over the head with these historical facts. Rather, they are dropped in with the deftness and creativity of an author who’s done this before. While some of the author’s methods are noticeably contrived, it’s written well enough, and filtered through the eyes of the characters often enough, that the abundance of history does not distract from the indulgence of the story.

But, more important, perhaps, than the history, are the lives and challenges of these three women. Samantha, a white, well-to-do debutante, wants nothing more than to be able to make her own decisions. Day Sets wants a future for her daughter, Mary, while she recognizes the unjust and unfair compromises her family and her people must make as the white-world overtakes her own. Harriet wants her freedom. She wants a life where her labor is her own, not someone else’s, and where her daughter can live free of the restraints of slavery.

There’s so much to discover about these three women and the world in which they lived. To read The River Remembers is to see their struggles, their hopes, their dreams, and yes, even their mistakes, masterfully laid out on the page—all of it carefully crafted with real historical details. But what happens to the women of A River Remembers by Linda Ulleseit? You’ll have to read the novel to find out.

The River Remembers is set for publication on June 27, 2023. I received a free advanced reader copy of the novel from the author in exchange for an honest review. You can pre-order the book now at Bookshop.org and other retailers.