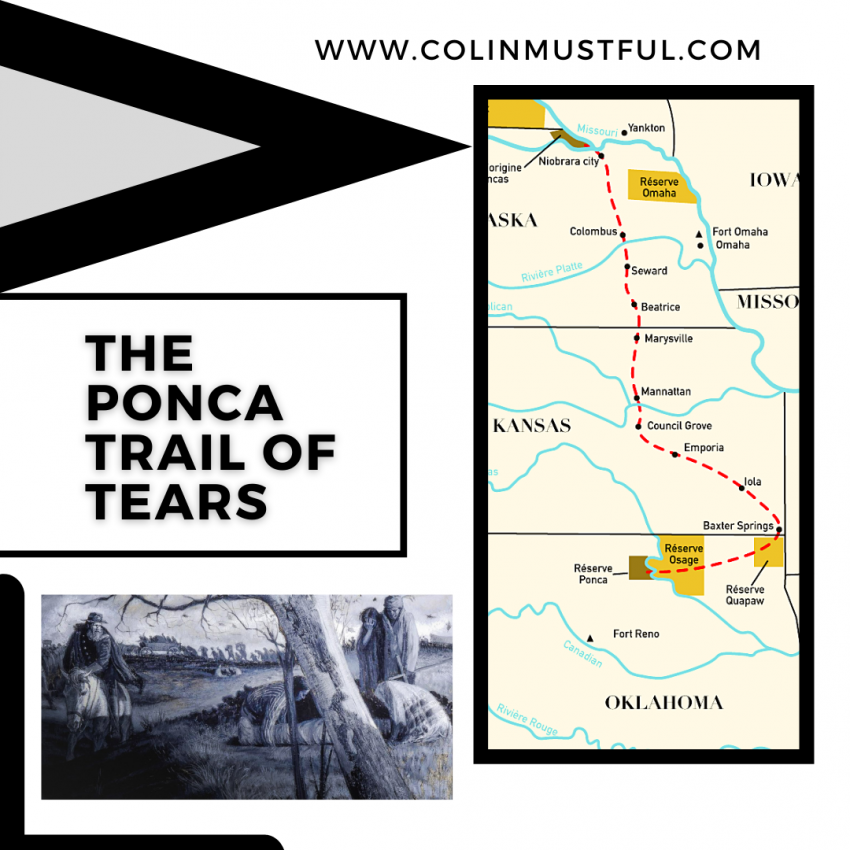 The forced removal and relocation of Native tribes by the U.S. government is a common theme in the history of U.S. relations with Native peoples. The forced removals often, if not always, broke with previous treaty agreements and the hazardous conditions of the relocation marches resulted in many Native deaths. The most widely-known of these marches is called the Cherokee Trail of Tears which took place in 1838 and caused the death of approximately 4,000 Cherokees. The Sandy Lake Tragedy of 1850, portrayed in the novel Resisting Removal, caused the death of approximately 400 Ojibwe due to the same Indian removal policies. Like the Cherokee, Ojibwe, and many other Native tribes before them, the Ponca Tribe of Nebraska was also removed from their homes and forced to make a long and deadly march.

The Ponca are a small tribe that are thought to have migrated west from the Ohio River Valley to the Great Plains. In the mid-16th century they migrated north along with several other tribes. After separating from those tribes, they settled near the mouth of the Niobrara River. Numbering about 800 people in 1779, the Ponca suffered a smallpox epidemic and their population was reduced to about 200 in 1804 when they were visited by the Lewis and Clark expedition. By 1874, their population had rebounded to 733 individuals.

The Ponca signed a series of treaties with the United States beginning in 1817. In a treaty signed in 1858, the Ponca agreed to cede their lands in exchange for a reservation located on the Niobrara River as well as annual cash payments, educational facilities, a grist and saw mill, and several agency contractors. According to Article Two of the 1858 treaty, the United States agreed “to protect the Poncas in the possession of the tract of land reserved for their future homes, and their persons and property thereon, during good behavior on their part.” However, in 1865, the U.S. negotiated a new treaty with the Ponca that moved their reservation to a position east and south of its original location.

Despite their promise to protect the Ponca in possession of their lands, the U.S. mistakenly gave away the Ponca reservation by placing it within The Great Sioux Reservation created by the 1868 Treaty of Fort Laramie. Because of this mistake, conflict arose between the Ponca and the Sioux/Lakota, who claimed a legal right to the Ponca land. As a result, the U.S. had to find a way to remove the Ponca from their homelands.

In 1875, Indian agent to the Ponca, A.J. Carrier, recommended to President Grant that the Ponca be moved to Indian Territory (present day Oklahoma). Grant agreed to the move as long as it was approved by the Ponca leaders. Carrier returned to the Ponca who, after some negotiation, agreed to move to Indian Territory. According to the terms, however, the Ponca leaders were allowed to select the site for their new reservation. Therefore, on February 2, 1877, Standing Bear and several other Ponca leaders began a trek south to the Osage Reservation to scout their potential new home. Upon their arrival, they found that many of the Osage leaders were absent and that the land was unsuitable for relocation. The Ponca leaders then told Indian Inspector E.C. Kemble that they wished to return home without surveying the lands. Kemble was furious and refused to support them on their journey home. Without rations, and exposed to harsh winter conditions, the Ponca made the strenuous journey home where they arrived on April 2, 1877.

When the Ponca leaders finally made it back to their reservation, they were met by Special Agent Kemble who told them that he had orders to remove them to Indian Territory—by force if necessary. A small contingent of Ponca, about 170 of their citizens, agreed to go voluntarily and left for Indian Territory on April 16, 1877. The remainder, about 500 Ponca citizens, remained on their Nebraska reservation until General William Tecumseh Sherman ordered two companies of American soldiers to Ponca territory to force their compliance. The Ponca, led by White Eagle and Standing Bear, departed their reservation on May 16, 1877. The 600 mile, 54-day journey south was plagued by poor weather conditions and resulted in the death of nine Poncas, including Standing Bear’s daughter, Prairie Flower, who died of consumption and was buried at Milford, Nebraska.

On July 9, 1877, the Ponca arrived at Indian Territory where their hardships continued. First, they suffered severe economic hardships at the loss of their homes and property. Also, their new location was a swampy area in a tropical climate which caused diseases such as malaria and yellow fever. In the first six months at their new location, 141 Ponca died. Before long, the death toll exceeded 200 people, or about 30% of the Ponca population. In January 1879, Standing Bear’s son, Bear Shield, was among those Ponca who perished because of the poor conditions at their new reservation. After his son’s death, Standing Bear requested approval from U.S. officials to return to his homeland along the Niobrara River so that he could bury his son. His request was denied. What followed, resulted in a landmark civil rights decision that forever changed the status of Native Americans under the law.

Colin Mustful is a Minnesota author and historian whose work focuses on the complicated and tumultuous time period when land was exchanged between Native and American hands. Using elements of fiction and nonfiction, Mustful’s work relies on real historical figures and documentation while creating compelling narratives that bring history to life. He has Masters degrees in history and creative writing and he is the founder and editor of an independent press called History Through Fiction.