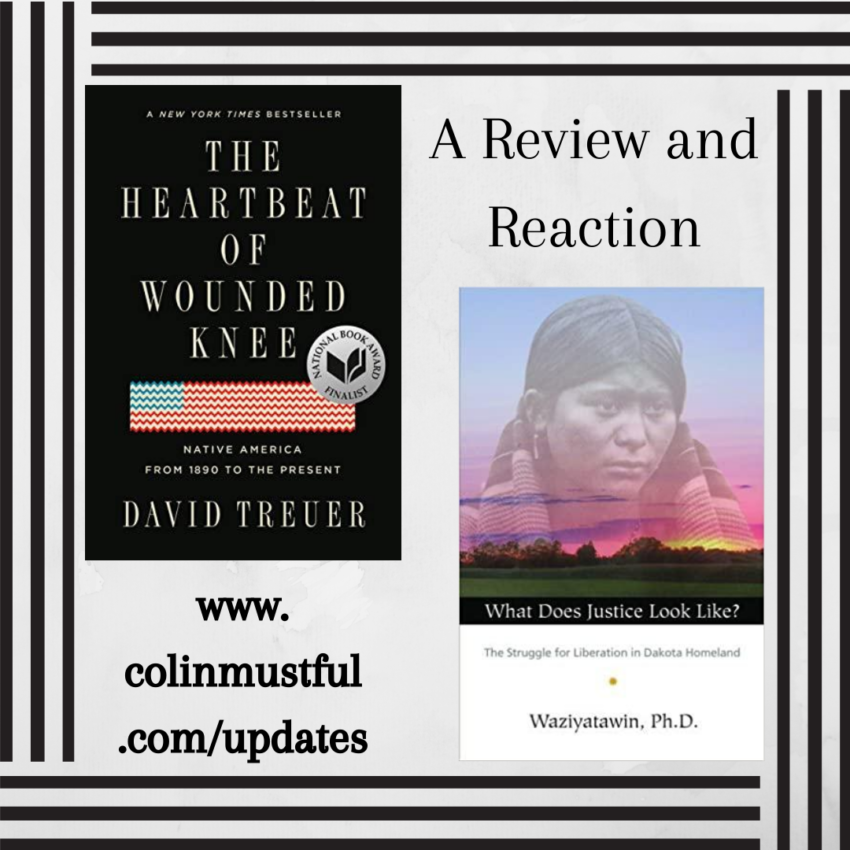 Recently, I finished reading two nonfiction books by Indigenous Minnesotans about the history and future of indigeneity in America. One was The Heartbeat of Wounded Knee: Native America from 1890 to the Present by David Treuer. The other was What Does Justice Look Like?: The Struggle for Liberation in Dakota Homeland by Waziyatawin. Treuer identifies as an Ojibwe from the Leech Lake Reservation while Waziyatawin identifies as a Wahpetunwan Dakota from the Pezihutazizi Otunwe (Yellow Medicine Village).

Before commenting, I’d like to identify my own background and interests. I am a white Minnesotan who grew up in the Twin Cities area of Minneapolis and St. Paul. While attending school in Mankato, I took an interest in what is now called the U.S. – Dakota War of 1862. I pursued that interest by researching the war, its aftermath, and its historical context, and then by writing a series of essays, historical novels, and other resources related to the U.S. – Dakota War. More recently, I have written a historical novel about an event known as the Sandy Lake Tragedy of 1850 involving the Lake Superior and Upper Mississippi bands of Ojibwe. As my writing and interests have developed, my perspective and understanding has, too.

I highly recommend both books for Americans of all backgrounds no matter their race, gender, status, politics, or religion. The reading, though not a source of entertainment, is informative, sobering, and discerning. Regardless of how much readers may already know or not know about the history and arguments presented in these books, each will give readers something to think about.

The Heartbeat of Wounded Knee is well organized and is written in an almost easy, objective tone. One of the book’s greatest strengths belongs to its first ninety-seven pages, in which Treuer divides present day America into distinct regions. He then describes the Native inhabitants of each region, and details their contact with European and then American colonialists. The brief context Treuer shares is a startling reminder, or perhaps lesson to some, of the genocide that swept over almost all Native peoples who lived throughout this country.

Treuer moves on to describe, in greater but still limited detail, the history of American/Indigenous relations from 1890 to the present day, using Wounded Knee as a watershed event. He organizes this part of the book by time period and by the policies and practices of the U.S. government that marked each period. Each section is characterized by interviews and anecdotes that blend in nicely with the historical facts and events.

After Treuer catalogues centuries of genocide, injustice, and trauma, he finishes his book in a tone of (what I would call) hopefulness. He recognizes that while Native Americans live with the challenges of historical trauma, on top of the burdens endured through destructive, inequitable policies, they have come to redefine what it is to be Native American—that is, they are Native and American. Natives are no longer hiding or somehow ashamed of their culture, language, and history. Rather, they embrace those things that make them uniquely Native while claiming their rights and inheritance as Americans.

Though Treuer’s book is in many ways heartbreaking, it is not condescending or cynical. And even though his book catalogues the past, he looks very much toward the future. I am left to wonder, however, what does that future look like and how far away is it?

Waziyatawin’s book, What Does Justice Look Like? bears little resemblance to Treuer’s—at least, regarding the tone and outlook. Like Treuer, Waziyatawin includes the historical context on which her lesson/argument is built. That is, she describes the history of the Dakota in Minnesota from creation to their exile in 1863. And, from what I can tell, she reports this history accurately, though she uses rather unambiguous and provocative language. For instance, calling the introduction of whites to Minnesota a “Wasicu Invasion.”

Waziyatawin takes a sharp turn from history to define genocide as laid out by the United Nations Convention on Prevention and Punishment of the Crime of Genocide. The definition includes five criteria which the author uses to show readers how each of the five criteria was met in Minnesota in violation of the Dakota people. Though harsh to contemplate, it is hard to dismiss the objective historical facts.

From this point in her book the author asks for truth and reparations. She contends that there was nothing innocent or unintentional about the take over of Dakota lands—that all settlers, traders, and politicians are accountable. She recommends that there ought to be a forum for acknowledgement and truth telling such as the Truth and Reconciliation Commission that occurred in South Africa after Apartheid. As for reparations, Waziyatawin leads with her argument to take down Fort Snelling, which, she disputes, is a symbol of genocide and colonialism built atop sacred land that rightfully belongs to the Dakota people. She goes on to argue that all historic forts, as symbols of colonialism and oppression, should be taken down.

Further reparations outlined in her argument include both a return from exile for those Dakota living away from their homeland, and a return of millions of acres of publicly held land. Waziyatawin stops short of extending a call for a return of all land, instead arguing for something more economically and practically viable. For instance, she points out that while much of the land in Minnesota is privately owned, there remains more than eleven million acres of publicly held land. Much of this land, she asserts, could be returned to the Dakota people without disrupting settler society. As a way to support her argument, she provides a stark reality by showing readers, using economic figures, just how much wealth is and has been extracted from the Dakota homeland. In many cases, that extraction has caused irreparable damage to the environment, something that further agonizes Dakota people—and all Minnesotans for that matter. By sharing economic figures on wealth, Waziyatawin is asking for a small portion to be given back to the Dakota people so that they can live with dignity and independence in their homeland.

Admittedly, Waziyatawin’s message is difficult to consume. Her tone, at times, is laced with bitterness. She questions the actions of other Dakota people and she draws numerous correlations to the Holocaust and Nazi Germany. That does not, however, invalidate the way she feels or mitigate the relevance of what she is arguing. What Does Justice Look Like? is indeed a confrontation—a confrontation that more and more Americans are realizing they need.

As for my reaction as a white Minnesotan, I am unnerved, saddened, and, in a way, capitulating. It is undeniable that what happened to the Indigenous populations of Minnesota, America, and the Western Hemisphere was a crime against humanity. It was a genocide. The responsibility that we, as a community, now hold is arguable, but our inheritance of wealth and freedom is not. As Waziyatawin points out and Treuer alludes to, Americans are not ready for the complete acceptance of our history, the truth of our inheritance, or the path toward justice, compassion, and dignity. This, of course, is evidenced by our current political and social climate that sees people marching in the streets, pulling down statues, and demanding reform.

I do not know the answer anymore then does Treuer or Wazayatawin, but I have recounted enough history and listened to enough Indigenous voices to know that something’s not right. Eventually, we will reconcile our past. We will acknowledge colonialism in America not for what it gave us, but for what it took away: life, peace, freedom, equality, dignity, empathy, humanity. It took away the basic humanity of countless groups and individuals and it is still doing so today. Eventually, we will reconcile—led, hopefully, by compassion, unity, and forgiveness. The only question that remains, is how long do we really need to wait?

Click here to learn about MAKOCE IKIKCUPI: A Project of Reparative Justice