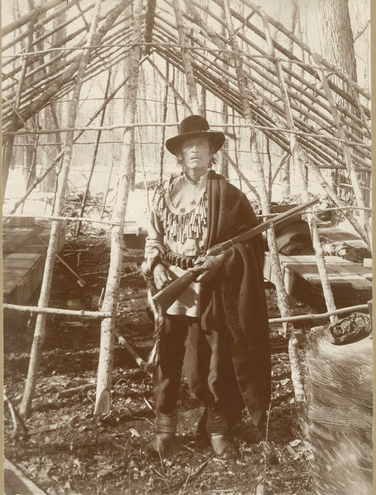 Commonly referred to as “the last Indian Uprising in the United States,” the Battle of Sugar Point at Leech Lake hardly meets that definition. Fought October 5 and 6, 1898, between a handful of aggrieved Pillager Chippewa and seventy-seven soldiers of the 3rd U.S. Infantry, the battle resulted in the death of six U.S. soldiers and one civilian police officer, but led to no further violence.

At the time of the battle, the Pillager Band of Chippewa were in the midst of a legal struggle to prevent the theft of timber from their reservation lands. Although logging companies were allowed to harvest dead or downed timber, they often set fire to healthy timber in order to claim it. In a petition to President William McKinley written September 25, 1898, the Pillagers wrote, “We now have only the pine lands of our reservation for our future subsistence and support, but the manner in which we are being defrauded out of these lands alarms us.”

Additionally, the Pillager and other Ojibwe bands expressed grievances over their frequent and unsubstantiated arrests. The Ojibwe were often taken into custody over dubious charges, transferred to far away cities such as Duluth or Minneapolis, and forced to walk home, a distance of one to two hundred miles. Such was the case with Bagone-giizhig, a 62 year-old Pillager arrested on bootlegging charges in early 1898. Bagone-giizhig, who shares no apparent relation with the earlier chiefs named Bagone-giizhig, was taken to Duluth for trial but was released for lack of evidence. Without money or transportation, Bagone-giizhig walked all the way back to his home at Sugar Point on Leech Lake. Following the experience, he was determined never again to be taken into federal custody.

But, on September 15, 1898, Bagone-giizhig and another Pillager named Sha-Boon-Day-Shkong, were seized in Walker by U.S. Deputy Marshal Robert Morrison and Indian Agent Arthur M. Tinker. The two were taken into custody as witnesses to a bootlegging operation, but before they could be transported a group of local Pillagers came to their rescue, allowing Bagone-giizhig and Sha-Boon-Day-Shkong to escape across Leech Lake to Sugar Point. The U.S. reacted by dispatching twenty soldiers to the area. The soldiers, led by Lieutenant Chauncey B. Humphreys, traveled to Onigum on Leech Lake where councils were held with Ojibwe officials. After negotiations broke down, Agent Tinker and U.S. Marshall Robert T. O’Connor traveled to Bear Island just opposite Sugar Point, but Bagone-giizhig, Sha-Boon-Day-Shkong, and their followers refused to surrender.

In response, a larger force of soldiers were sent to Walker from Fort Snelling. Then, on the morning of October 5, two boats and one barge loaded with several Indian office men, U.S. marshals and deputy marshals, an army surgeon, four reporters, and 77 troops departed Walker for Sugar Point. The troops were commanded by Brevet Major Melville C. Wilkinson and Brigadier General John Mosby Bacon. The troops arrived at Bagone-giizhig’s cabin on Sugar Point and found that neither he nor Sha-Boon-Day-Shkong were present. After searching the area, two Pillagers involved in the earlier rescue were arrested and placed on the boats.

Although various accounts of the ensuing battle differ, according to the reports of Bacon and his men, at approximately 11:30am while the soldiers were stacking their weapons before lunch, an inexperienced soldier forgot to engage the safety on his rifle causing it to accidentally fire. Fearing they were under attack, the Ojibwe hiding in the woods surrounding the cabin returned fire. The soldiers set up skirmish lines around the cabin, but in the first thirty minutes of battle many U.S. soldiers were wounded and killed, including Major Wilkinson who was mortally wounded in the abdomen. The battle settled into an exchange of volleys which lasted into the evening. That night an Indian police officer was shot and killed by a soldier who mistook him for the opposition. The final casualty of the battle took place the next morning when a hungry soldier was shot and killed while digging for potatoes.

After the battle, panic spread throughout the region and country as false information was disseminated about an Indian Uprising. Newspaper headlines read “Rumored Massacre of One Hundred Soldiers” and “Fierce Fight with Bear Lake Savages in Minnesota.” In Bemidji, residents barricaded themselves in the courthouse until a militia sent from Duluth arrived to protect them from the perceived threat. In Walker, two hundred-fourteen troops arrived armed with a Gatling gun.

Eventually the panic settled and on October 10, U.S. Commissioner of Indian Affairs William A. Jones negotiated for several days with Pillager leaders at Leech Lake. As a result of the negotiations, several of the September 15 rescuers were given into custody, but none of the men involved in battle were charged or arrested. Also, neither Bagone-giizhig or Sha-Boon-Day-Shkong were arrested for their escape or refusal to surrender. After his return to Washington, Commissioner Jones analyzed The Battle of Sugar Point in a report to the Secretary of the Interior writing: “The Indians were prompted to their outbreak by the wrongs committed against them and chafed under unfair treatment. They now will go back to their homes and live peaceably if the whites will treat them fairly, which is very likely, as the whites were thoroughly impressed with the stand taken by the Indians. In this respect the outbreak has taught them a lesson.”