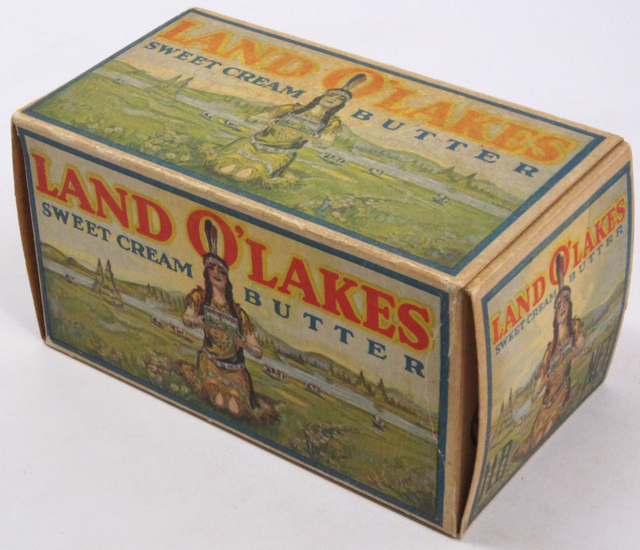 In a press release on February 6, 2020, Land O’Lakes Dairy Co-op announced the removal of  “Mia”, an Indian Maiden and advertising character, from their packaging. The move, which was originally overlooked, has sparked both criticism and praise, while still others see it as an opportunity to make amusing commentary about the brand and its buyers. But, whether praising or criticizing the move, it is important to consider what brought us to this point.

In Minnesota in 1862, war broke out between a faction of Dakota soldiers and the white settlers, traders, and agents living in southwestern portions of the state. A defense was organized at New Ulm and Fort Ridgely, and shortly thereafter U.S. armed forces from Fort Snelling in St. Paul arrived forcing the retreat and eventual surrender of the Dakota.

The people of Minnesota were angry. U.S. Army General John Pope called for the extermination of the Dakota people while newspaper editor Jane Grey Swisshelm advised, “They should be got rid of in the cheapest and quickest manner.” One newspaper report referred to the Native population in Minnesota as “greasy devils” while another called them a “barbarous and worthless race.” This hateful sentiment carried over into action when, on December 26, 1862, thirty-eight Dakota men were hanged in Mankato, Minnesota. Then, the following spring, all treaties with the Dakota and Ho-Chunk peoples were abrogated while their people were exiled to an inhospitable reservation in the western Dakotas called Crow Creek.

Years after the tragic conflict, the sentiment changed as advertisers recognized an opportunity to re-brand the Native image. The change had its origins in Henry Wadsworth Longfellow’s poem, Song of Hiawatha, written in 1855. The poem, which was set at the shores of Gitche Gumee (Lake Superior), was based on a romantic collection of stories by Mary Eastman. It also blended elements of Iroquois mythology with Ojibwe legends collected by ethnographer Henry Rowe Schoolcraft. The author never actually visited Minnesota. Nevertheless, the poem received great acclaim and Minneapolis leaders recognized an opportunity to link their city to the iconic poem. According to historian Mary Lethert Wingerd, “City leaders began imprinting their developing urban landscape with names from Longfellow’s poem—Hiawatha, Minnehaha, Nokomis—claiming his noble Indians as icons of civic distinctiveness.”

One notable name change was Brown’s Falls which became known as Minnehaha Falls, a popular tourist and leisure destination in Minneapolis. After an 1893 penny drive by local schoolchildren, artist Jakob H.F. Fjelde was commissioned to create a statue of Longfellow’s poetic characters Hiawatha carrying Minnehaha. The statue was placed near the falls in 1912 and became a treasured symbol of the city and an eagerly sought attraction by literary pilgrimists. The statue, along with various other artistic representations of Native peoples, marked a change from the Indian as a “savage” to the Indian as a romantic ideal cherished for simplicity and connection to nature.

In his book, Shades of Hiawatha: Staging Indians, Making Americans, 1880–1930, Alan Trachtenberg refers to the change in perception and representation as the “Age of Hiawatha.” The “Age of Hiawatha” was embraced by Minnesota’s tourist industry and promoted the “noble Indian” as an icon. Trachtenberg argues that for some, the new perspective was a “promise [of] national redemption: absolution of the sins of conquest, legitimation by offering themselves as founders and guardians of nationhood.”

Like the tourist industry, businesses also sought to take advantage of the new Native imagery. One such business was the Minnesota Cooperative Creameries Association who, after incorporating in 1921, held a contest to select a brand name and logo for its new butter cream. The winning name was Land-O-Lakes Creameries Association, established in 1926, and the winning logo was that of a young Native woman in profile shading her eyes and looking across a lake. At the time, company leaders believed they were paying homage to the state’s Native American heritage little knowing that the image had no connection to the state’s history or its Native populations. The original logo was altered in 1928, moving the Indian maiden, who became known as Mia, to the center of the package facing the viewer. Then, in 1939, illustrator Jess Betlach eliminated from his scene flowers, cows, and other details of the 1920s landscape, replacing them with a large lake and buttery sky. The logo was changed again, years later, by Ojibwe artist Patrick DesJarlait, this time with more descriptive features.

Today, the image of the Indian maiden has been removed, leaving behind her the serene northern Minnesota landscape. Whether praised or criticized, the move is an important turning point and a chance for an open dialogue, renewing discussions about our past and raising questions about who we are and who we wish to become.