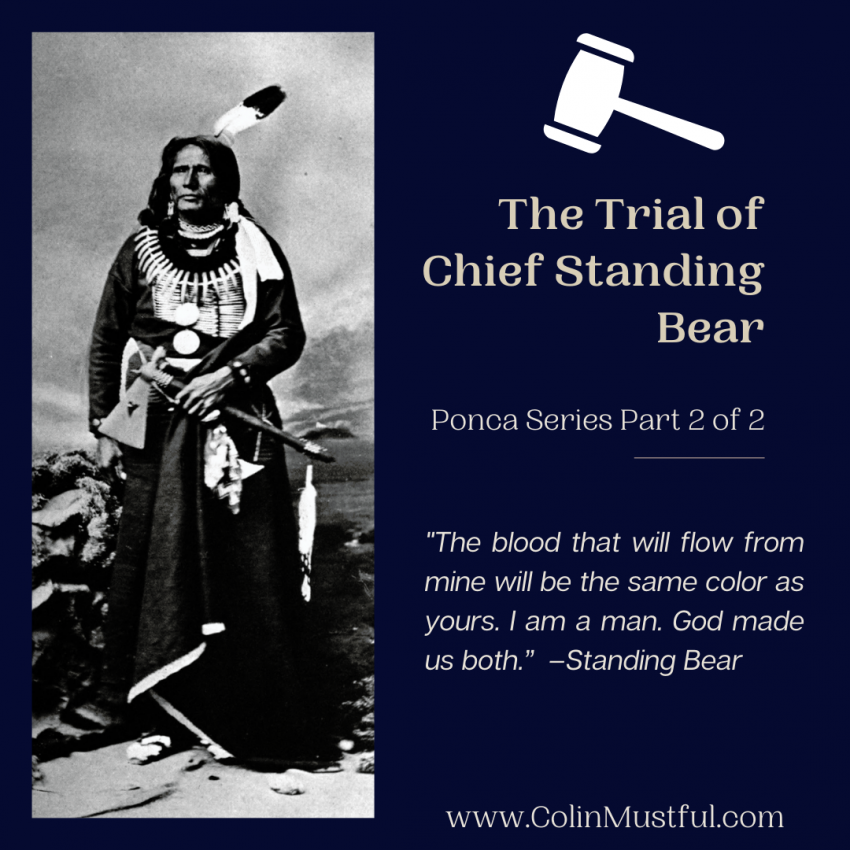 In 1877, the Ponca of Nebraska, led by Chief Standing Bear, endured a 600 mile forced march from their homes near the Niobrara River to Indian Territory in present day Oklahoma. The removal occurred in the years after the U.S. government mistakenly gave away the Ponca Reservation lands in the Treaty of Fort Laramie. The Ponca that survived the journey were resettled on uninhabitable swampland, causing many of the Ponca to die of disease in the months and years after resettlement. In January of 1879, Bear Shield, the son of Standing Bear, was among the Ponca who perished. In order to honor his son’s request, Standing Bear tried to return to the Ponca homeland to bury Bear Shield near the Niobrara River. However, when Standing Bear and his followers arrived at the Omaha Reservation in March of 1879, they were arrested by orders of General George Crook for leaving their reservation. Then, they were escorted to Fort Omaha to be held until their forced return to Indian Territory.

While being detained at Fort Omaha, the small group of Ponca became sick which delayed their return to Indian Territory. It was during this delay that the plight of Standing Bear and the Ponca drew the attention of Thomas Henry Tibbles, the assistant editor of the Omaha Daily Herald. Known as an ardent Indian right’s activist, Tibbles sympathized with the Ponca’s situation and worked quickly to share Standing Bear’s story. Then, he enlisted the support of local ministers to petition the Secretary of the Interior, Carl Schurz, to reverse his removal order. During this time Tibbles also spent many nights in a law library devising plans for a court case that might free Standing Bear and his followers. With a rough idea in mind, Tibbles brought the case to the attention of lawyers John L. Webster and A.J. Poppleton. The lawyers agreed to represent Standing Bear without a fee and then petitioned Judge Elmer S. Dundy of the United States District Court for a writ of habeas corpus—a legal order that challenges the lawfulness of an imprisonment. Judge Dundy issued the writ and ordered the opposing parties to appear before him in court.

The case of Standing Bear v. Crook opened in Omaha on April 30, 1879 and lasted just two days. As the lawyer representing General Crook and the U.S. government, G.M. Lambertson argued that as an Indian, Standing Bear could not sue the government because he was neither a citizen, nor a person. Furthermore, as dependents of the government, Lambertson argued, Indians were not entitled to the rights and privileges of citizens. On the other side, the attorneys for Standing Bear argued that the Ponca had made great advances and were no longer dependent on the government. Also, and more importantly, they said that the Ponca were citizens and people and as citizens were entitled to all the rights and privileges granted by the fourteenth amendment. Finally, Poppleton and Webster pointed out that the U.S. had no legal right to take the Ponca land in the first place. Speaking through an interpreter, Standing Bear stood before the judge and said, “That hand is not the color of yours, but if I pierce it, I shall feel pain. If you pierce your hand, you also feel pain. The blood that will flow from mine will be the same color as yours. I am a man. God made us both.”

Ultimately, Judge Dundy agreed with Standing Bear and his attorneys, ruling that “an Indian is a person within the meaning of the law” and that Standing Bear was being held illegally. The decision freed the Ponca from imprisonment and allowed Standing Bear to return to his homeland to bury his son. Congress acknowledged that they had wronged the Ponca when they gave away their lands, and by 1890 the Ponca were provided individual allotments of land along the Niobrara. The ruling by Judge Dundy was a landmark civil rights decision that has been compared in impact to cases such as the Dred Scott Decision and Brown v. Board of Education. However, Native peoples were not granted full citizenship until the Indian Citizenship Act on June 2, 1924.