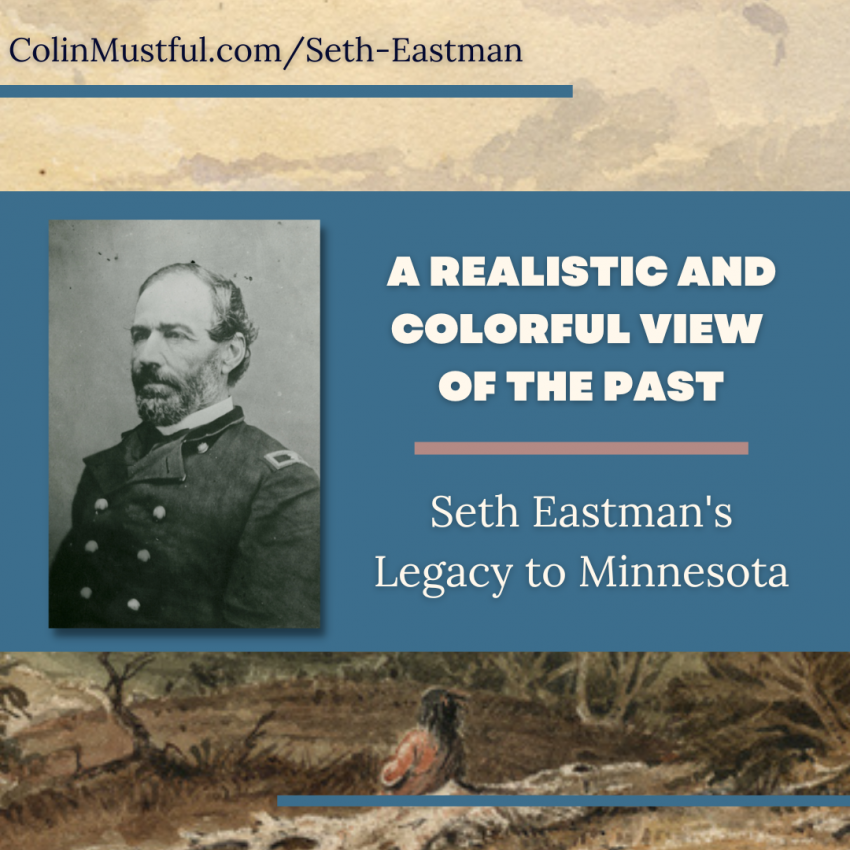 You’ve most likely seen the artwork of Seth Eastman before. In fact, if you’re reading this on my website, all you need to do is scroll up to see one of Eastman’s paintings on the title bar of this page. His work, if not brilliant, was certainly prolific and illuminating—much of it depicts the lives, landscape, and lifestyle of Native Americas during the mid-19th century. His most prominent work, in my opinion, are the many paintings he did of the people and landscape near Fort Snelling. The depths, colors, and details of his paintings provide a realistic view into Minnesota’s past that can’t be gained through historical documents. But who was Seth Eastman and why did he have such a penchant for portraying the region we now call Minnesota and its Native population?

Eastman grew up in Brunswick, Maine where he was born on January 24, 1808. He was the eldest of thirteen children and at age sixteen he enrolled in the United States Military Academy at West Point. While attending West Point, Eastman began to paint scenes featuring the daily life of local Native American tribes. Upon graduating in 1829, he joined the Army as a second lieutenant in the 1st Infantry Regiment.

In 1830, Eastman was assigned to topography duty on the frontier and spent three years at Fort Snelling, which, at the time, was a frontier outpost deep in Indian territory. Eastman soon learned the Dakota language and married Wakan Inajin-win (Stands Sacred), the fifteen-year-old daughter of Cloud Man, a Dakota chief. Together they had a daughter named Wakaŋ Tanka Wiŋ—or Mary Nancy in English.

Eastman left Fort Snelling in 1832 and declared his marriage ended. He was reassigned to West Point where he taught drawing for mapmaking from 1833 to 1840. While there, he met and married Mary Henderson, the daughter of a West Point surgeon. In 1841, Eastman returned to Fort Snelling where he was appointed commander. He, his wife, and their children remained there for seven years.

It was during this time he created numerous paintings and drawings of the Dakota and Ojibwe people living near the fort. This includes paintings such as “Distant View of Fort Snelling,” “Permanent Residence, Sioux,” “Wenona’s Rock on the Mississippi,” and many others. All of them share a clear style that offers a broad, idealistic view of the landscape in the background with a Native inhabitant or inhabitants in the foreground. The paintings and drawings are elegant and natural and show a harmonious view of the region before things drastically changed. Also, according to historian Julia Lavanger, “unlike his peers, Eastman mostly avoided romanticizing the Native people with whom he lived.” This is evident in sketches such as “Indian Woman Scraping a Hide,” that, like the title suggests, shows a Native woman going about daily chores without accentuating her Native culture in a stereotypical manner.

In addition to his many paintings, Eastman also illustrated two significant texts. These include Dacotah, or Life and Legends of the Sioux Around Fort Snelling written by Mary Henderson Eastman, his wife, and Historical and Statistical Information Respecting the History, Condition, and Prospects of the Indian Tribes of the United States, a six volume work by Henry Schoolcraft. For his wife’s book, Eastman completed twenty-one illustrations of Dakota life. For Schoolcraft’s, it’s reported by Lavanger that “he created eighty-five compositional drawings of Native life and more than 180 drawings of artifacts and maps.” According to another historian, Toby Thompson, for the entire six-volume work Eastman provided 275 drawings and watercolors.

In 1849, Eastman also helped design Minnesota’s Territorial Seal, a symbol that was the basis for the Minnesota State Seal. In it, a man (presumably a white farmer) plows a field while looking at a Native American on a horse who is riding away. In the background are the Falls of Saint Anthony.

Years after leaving Fort Snelling, in 1867, Eastman was commissioned by the House Committee on Indian Affairs to make nine paintings for the committee’s chambers. Those paintings, which were influenced by his early years at Fort Snelling and Fort Crawford, show Native peoples and culture in a natural and traditional manner. With the exception of one of the paintings, they show an era of peace and tranquility. They include works such as “Rice Gatherers,” “Indian Mode of Traveling,” and “Spearing Fish in Winter.” Today, those canvases still hang in a hearing room formerly used by the House Committee on Indian Affairs.

Eastman died in his home in Washington D.C. in 1875 while working on a painting of West Point. His work has provided future generations a much fuller view of an era of conflict and change and I for one am quite grateful for it.

All gallery images from the Collections of the Minnesota Historical Society.