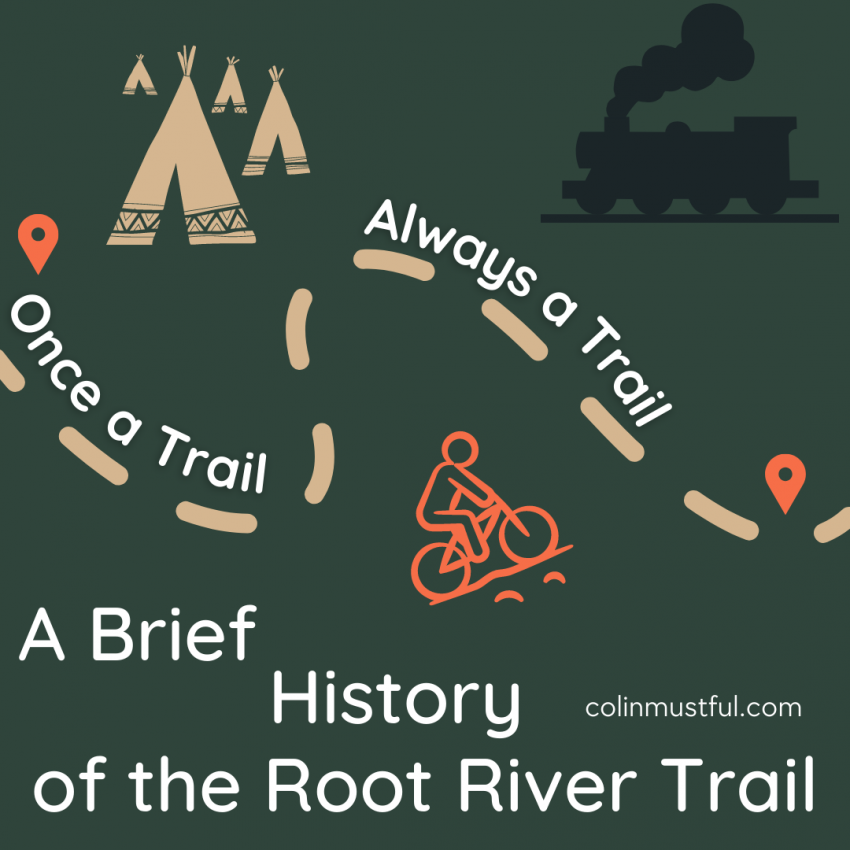 The Root River Trail is a 42-mile paved path meandering through the driftless region of Southeastern Minnesota from Fountain to Houston. Set among the limestone bluffs of the Root River, today the trail is used for biking, jogging, walking, in-line skating, and cross-country skiing. But before becoming a recreational path in 1986, the trail had many other uses. Until 1979, railroad tracks cut through the steep hills and forested ridges of the valley. And those railroad tracks, built in the 1860s, were laid atop a carriage path. Before the carriage path, there was a Native American trail running through the valley.

The Root River is an 80-mile tributary of the Upper Mississippi River Valley flowing eastward through what is today Southeastern Minnesota. The Root River watershed covers 1,670 square miles of driftless riverine terrain encompassing six Minnesota counties. It is a beautiful, lush region unique for its geology and geography as part of the Driftless area—a place characterized “by the absence of glacial drift deposits, the sculpted topography, and the presence of the ancient limestone immediately beneath the soil and in cliff outcroppings.”

The river has been known by many names. Called “R. des Kicapous” on a 1703 map, it did not take on the name Root River until the early 1800s. Explorer Zebulon Pike referred to the river as Racine in 1805, but by 1817, when Stephen H. Long led an expedition through the region, it was called Hokah or Root. Hokah is the Dakota word for root. In 1843, Joseph Nicollet referred to it as Hokah while in 1852, missionary to the Dakota Stephen Riggs called it Hutkan. The river has also been called Cah-he-o-mon-ah, or Crow river by the Ho-Chunk. Interestingly, according to historian Lafayette Bunnell, the Dakota “also called Root river Cah-hay Wat-pah, because of the nesting of crows in the large trees of its bottom lands.”

Prior to American settlement, the Root River Valley was dominated by the Dakota and a dynasty of successive leaders named Wabasha. According to historian Charles C. Wilson, “The Wabasha dynasty claimed and exercised jurisdiction over the eastern bank of the Mississippi opposite Winona, for at least twenty-five miles either way, up and down the stream, and over the islands therein.” Wilson went on to write that “within that territory the reigning Wabasha was in older times the lord of all. On the lands drained by the Root river or the Zumbor, no Indian could camp or hunt without his consent.” It’s also known that the elder Wabasha, or Wabasha I, died on the banks of the Root River in 1806 about 25 miles southwest of present day Winona.

The actual route of a trail through the Root River Valley prior to the building of a railroad is hard to determine. However, written evidence from expeditionaries like Stephen H. Long make it clear that common trails in the region did exist. In his 1817 expedition from Prairie du Chien to the Falls of St. Anthony, Long reports that he had a “good” Native American guide that led them on the most direct trail where water could not be used for travel. This included at least one crossing of the Root or Hokah river.

In the 1840s, researcher William Pidgeon met and interviewed a Native American man from the Ioway tribe named De-Coo-Dah living near Prairie la Crosse. Pidgeon was in search of Native mounds with De-Coo-Dah as his guide. In his 1858 book, Traditions of De-Coo-Dah and Antiquarian Researches, Pidgeon left the following account:

“We descended the Mississippi from my Trading Post on Root River, to the Western Terminus of what he termed the highway of Nations, but better known in modern time as the old Indian trail, running from Lake Michigan to the Mississippi River. I have but little doubt, however, that this Trail occupies the best natural line for travel between those two Great Waters, and has been used for very many ages by the ancient inhabitants of those regions, and will continue to be used as the great thoroughfare in time to come to the full consummation of its ancient and dignified title; that it will lead along through the Holy Land the sons of all Nations, presenting to their view the remaining relics of a custom wants Universal, but now to all alike unknown.”

This is some of the most direct evidence of a Native American trail traveling east to west through the Root River Valley. And, in hindsight, Pidgeon was correct in asserting that the trail would “continue to be used as a great thoroughfare.”

Further evidence of a trail prior to white settlement was provided by the Minnesota Department of Natural Resources when, in 1979, they conducted a study of the recently abandoned railroad route through the Root River Valley. In their report of the study, the DNR made the following conclusion:

“A trail which follows two main routes of prehistoric and historic travel—the Root River itself and the Chicago, Milwaukee, St. Paul and Pacific Railroad bed—follows two major arteries of communication which encompass much of the past of this area. The proposed trail is also apparently intersected at various points by former stagecoach line routes and other prehistoric and historic trails.”

Their study, called the Milwaukee Road Corridor Study, included maps of the region with various markings to indicate an “Indian Trail.”

Since 1986, recreation goers have enjoyed a scenic and tranquil path through picturesque towns and past scenic landscapes along the Root River Trail. For them, little thought is given to the century of railroad travel, decades of stagecoaches, and a millennia of Native travelers that used the path before them. Perhaps, years ahead, the trail will find another purpose, and those travelers will pass through without ever considering what it once was.

Lafayette Houghton Bunnell, Winona (We-no-nah) and its environs on the Mississippi in ancient and Modern Days, (Winona, MN: Jones & Kroger, 1897).