Around the year 1850, Ojibwe historian William Whipple Warren began recording the oral history of the Ojibwe people.  His findings were published posthumously in 1885 in a book titled, History of the Ojibway Nation.  In it, Warren describes the great migration when the Ojibwe moved from “the great salt water toward the rising sun,” to the island of Moningwunakauning, known today as Madeline Island or La Pointe.  This migration began around the year 900 CE and took several hundred years to complete. Once settled at La Pointe, the Ojibwe spread out in all directions. According to Warren, La Pointe was “the root from which all the far scattered villages of the tribe have sprung” (Warren, History of the Ojibway, 78, 80).  That is why La Pointe has been called the ancient homeland of the Ojibwe people.

Warren described the Ojibwe territory in 1850:

“The Ojibways are scattered over, and occupy a large extent of country comprising all that portion of the State of Michigan lying north of Green Bay and west of the Straits of Michilimackinac, bordering on Lake Superior, the northern half of Wisconsin and the northeastern half of Minnesota Territory.  Besides this they occupy the country lying from the Lake of the Woods, over the entire north coast of Lake Superior, to the falls of St. Mary’s and extending even east of this point into Upper Canada. They literally girdle the great “Father of Lakes,” and the largest body of fresh water in the world may emphatically be called their own, Kechegumme, or “Great Water”” (Warren, History of the Ojibway, 37). 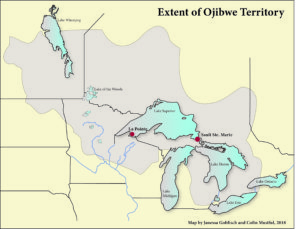 Warren went on to describe their population at this time, estimating the total number of Ojibwe people at 15,000.  Within the boundaries of the United States he estimated there were 9,000 Ojibwe people—1,000 living in Michigan, 3,000 in Wisconsin, and 5,000 in Minnesota Territory.  While describing their geography, Warren wrote that the Ojibwe “reside almost exclusively in wooded country” and that the entire territory is connected by waterway. Because of this, the Ojibwe traveled by birch bark canoe.  They relied on birch bark for many purposes including the construction of their homes, called wigwams. Warren also briefly described the Ojibwe way of life, writing that “they procure food principally by fishing, also by gathering wild rice, hunting deer, and, in some bands, partially by agriculture” (Warren, History of the Ojibway, 38–40).