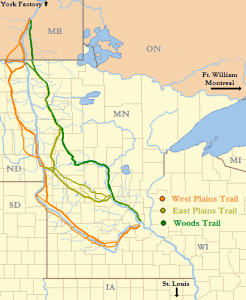 In 1812, Thomas Douglas, 5th Earl of Selkirk, established a colony of settlers at the site of present day Winnipeg.  This remote British settlement was known as the Red River Colony.  Initially only linked by trade with Great Britain, the Red River Colony quickly realized the advantage and necessity of establishing trade with its foreign neighbors to the south.  Acting as a natural thoroughfare, colonist established ox cart trails along the the Red River and Minnesota River valleys thereby connecting them through commerce with American settlements at Fort Snelling, St. Paul, Traverse des Sioux, Lac qui Parle, Big Stone Lake, Lake Traverse, and others.

Initially, trade was limited as furs were sent south and seeds and other agricultural implements were sent north.  But as time went on trade expanded to include all manner of goods that could be carried by ox cart.  By the time Minnesota became a territory in 1849, the arrival and departure of the Red River brigades became a characteristic feature of life in St. Paul, and the local newspapers often reported them.   The three routes—Woods trail, West Plains trail, and East Plains trail—were an invaluable part of economic development for the Minnesota frontier settlements as well as sustaining the Red River Colony and providing important migration and communication routes.  The impact and importance of these trails cannot be overlooked in the history of these regions.

A description of the carts is provided by William W. Ellison in the book, Old Rail Fence Corners:

“The Red River carts had wheel rims eight inches wide. I have seen them with solid wheels cut from a single round of a tree. I have heard that the carts around Pembina were formerly all like this, but in my day they generally had spokes. I suppose they were lighter. It was the width of wheel and sagacity of the animal that made it possible to go with security over the most impossible roads. They usually carried eight hundred pounds. When they reached St. Paul they camped where Larpenteur’s home is now.”