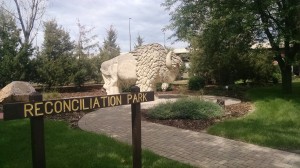 Along South Riverfront Drive in Mankato, MN, stands a large and unmistakable statue of a buffalo.  Known as Reconciliation Park the buffalo, plaque, and large script (not photoed here) commemorates the hanging of 38 Dakota Indians on December 26, 1862, the largest mass execution in U.S. history.  As a resident of Mankato for several years, this statue peaked my interest and led to years research and writing about the Dakota War, its aftermath and its causes.  But until recently, I had never visited the park and statue itself.  I believe the park and memorial are important toward creating awareness about our past.  Hopefully, it can also lead toward education and understanding, and eventually, reconciliation.