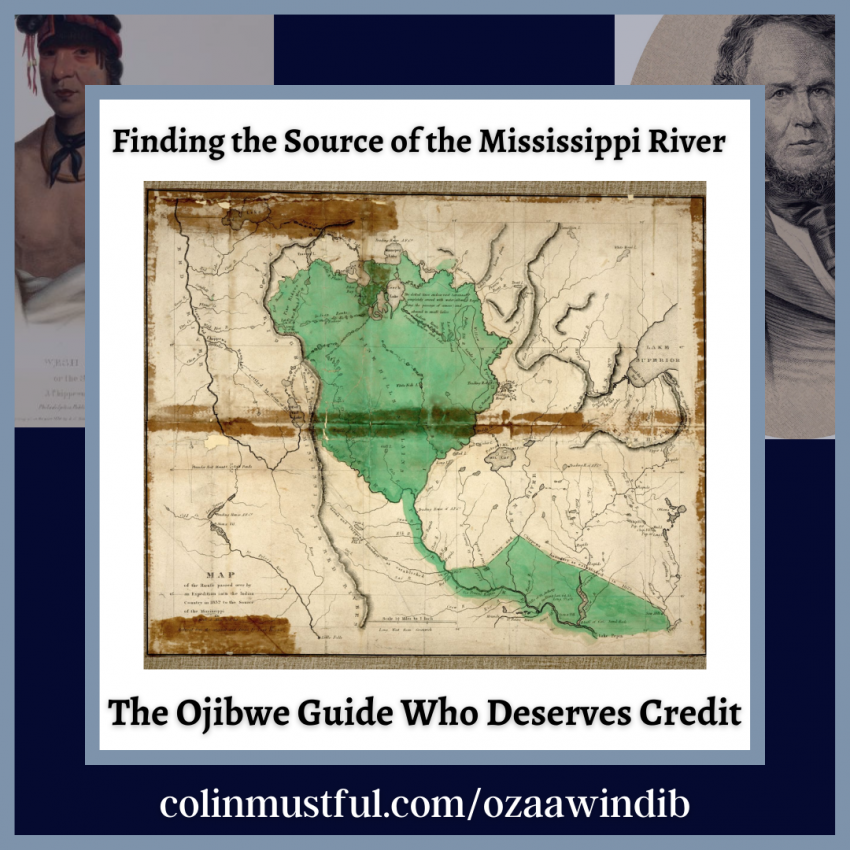 American geographer, geologist, and ethnologist Henry Rowe Schoolcraft is generally regarded as the man who found and identified the source of the Mississippi River in 1832. But this interpretation, which has been perpetuated throughout American history, fails on two levels—it does not recognize people who had already found the source of the Mississippi, nor does it acknowledge the contributions of Ozaawindib, the Ojibwe guide who led Schoolcraft to the river’s origin.

Fourteen years later, in 1820, governor of Michigan Territory Lewis Cass led an expedition to map the region and locate the source of the Mississippi. Along with Cass was Henry Schoolcraft, the expedition’s mineralogist. Upon reaching Upper Red Cedar Lake, Cass, like Pike before him, identified it as the source of the Mississippi River. But Schoolcraft had his doubts, noting in his journal that the lake had two large inlets, one of which was called Mississippi by the Voyageurs.

Then, in 1823, an Italian named Giacomo Beltrami, took leave of an expedition headed by Major Stephen H. Long. From Pembina, Beltrami traveled southeast where he believed the Mississippi had its origin. After reaching Red Lake with the help of Native and French guides, Beltrami traversed the Mud River to a “small, heart-shaped lake, three miles in circumference” which he named Lake Julia. Beltrami was content to declare Lake Julia both the most southern source of the Red River and the most northern source of the Mississippi.

In 1831, with the actual source of the Mississippi declared but still uncertain, Schoolcraft was instructed to lead an expedition “into Lake Superior and the Mississippi country” in order to persuade the Ojibwe and Dakota peoples to end their perpetual warfare. The underlying purpose was to create peace in order to negotiate treaties and obtain the lands. Having successfully met with numerous Native communities throughout the summer of 1831, Schoolcraft decided to return to the region the following summer. In July of 1832, while leaving the region, Schoolcraft encountered a small party of Cass Lake Ojibwe led by Ozaawindib, known as Yellow Head by the whites. Ozaawindib was on her way to Sault Ste. Marie to warn white authorities of potential warfare. But, being that Ozaawindib was from Cass Lake, Schoolcraft saw this as an opportunity to, once-in-for-all, find the source of the Mississippi River. After some negotiation, he persuaded Ozaawindib to act as their guide for such a mission.

Together with Schoolcraft’s party, Ozaawindib returned to Cass Lake where, according to historian William Watts Folwell, she immediately “collected five small canoes, drew maps, and engaged additional guides for the capital object of the expedition.” Then, on July 11, 1832 Ozaawindib guided the party to Lake Bemidji where they turned southwest along the eastern fork of the Mississippi now known as the Schoolcraft River. After two days of “toilsome navigation” and a six-mile portage heading west, the party arrived at what Schoolcraft called “a transparent body of water”—the source of the Mississippi River. Having accomplished his mission, Schoolcraft planted an American flag on an island in the lake. He proceeded to rename the lake, called Omashkoozo-Zaaga’igan by the Ojibwe and Lac La Biche by the French, by combining the Latin words Veritas (true) and Caput (head). It’s new name would be Lake Itasca. Upon returning to Cass Lake, Schoolcraft awarded their capable guide, Ozaawindib, with the president’s medal, a practice used by the U.S. government to identify Native Americans as chiefs among their people.

Schoolcraft’s accomplishment, while important, ignores the fact that the lake had already been identified and named by the French and the Ojibwe. And while awarding his Ojibwe guide the president’s medal may have shown gratitude, it failed to place Ozaawindib at her rightful place in history. Known among the Ojibwe as an agokwa—a person deemed male at birth who took on women’s roles—Ozaawindib was not only a guide who interacted with many French and American traders and explorers, but she was also a capable soldier. Her father, Wiishkobak, was a chief of the Leech Lake Ojibwe. As an agokwa, or Two-Spirit Ojibwe, living in the late 1700s and early 1800s, she likely had to navigate a complex and changing social environment. Nevertheless, she rose to the top of her community and greatly aided U.S. officials to end their decades-long mission to locate the source of the Mississippi. While Ozaawindib is remembered by several place names, she has not, as suggested by historian William Watts Folwell, received her full share of the credit.

Colin Mustful is an author, historian, and publisher. His work focuses on the complex and tragic history of settler-colonialism and Native displacement in the American Midwest throughout the 19th century. He is also the founder and editor of History Through Fiction, an independent press publishing compelling historical novels. Mustful has a Master or Arts degree in history and a Master of Fine Arts degree in Creative Writing.