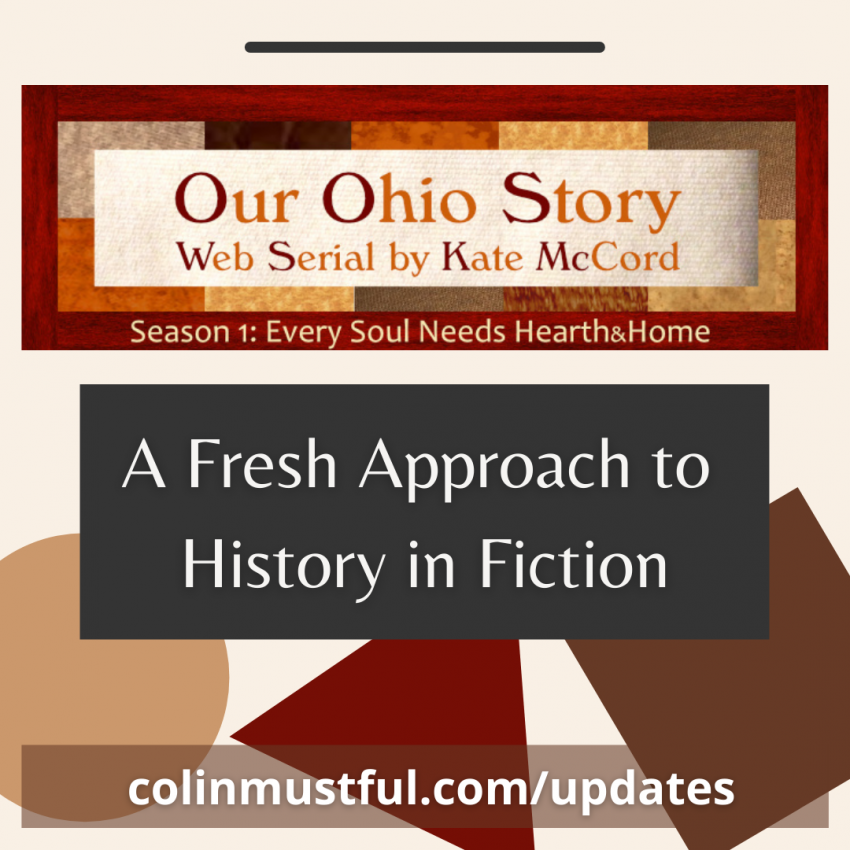 Recently, I came across Our Ohio Story, a web serial by Kate McCord that tells an American story through a patchwork of sequential chapters, character sketches, and cultural reflections. It’s so engaging. It’s a wonderful way to use fiction to teach and get people really thinking about history. And though it’s an Ohio story, it’s not much unlike the stories I share about the settlement of Minnesota and its Native inhabitants. Here’s an excerpt from McCord’s first chapter. You can follow along on her website for free.

1757 on the English calendar

The knot of a black oak root pressed into the boy’s hip. He shifted. Beneath his elbow, the steady Ohio River sucked soft earth from its bank and swallowed. The boy placed his hand on the base of the rough trunk beside him. He peered across the gentle face of the river. In the distance, three low wooden boats cut diagonally toward him. Virginia territory, their origin, the Shawnee’s home, their destination. Brave men, the boy thought. Brave enough to cross the Appalachians, build boats, dig their oars into the water, and fight their way into a land they didn’t belong in.

He lifted his bow and slipped a stone-tipped arrow into the cord.

A bearded man with a wide-brimmed, rounded-crown, black hat searched the bank where he hid.

The boy peered back. “Are you him?” He asked. His hands trembled.

Gray Hawk pulled himself beside the boy. “Be careful.” He whispered. “They’ll steal you if they see you.”

The boy nodded, aware of the deep auburn hair of his topknot and the flash of meadow green shoots in his eyes. The red and black paint streaked across his face and chest, the heavy grease that protected his skin from mosquitoes’ bites, the soft leather band around his waist, the dark blue cotton cloth that held his loins steady enough to run fleet-footed through the forest could not hide his true lineage. The man with the black hat might now, after all these years, demand him.

The boy pulled the string of his bow to his shoulder.

Gray Hawk touched him gently. “They’re too far away.”

The boy held his bow steady.

The man with the black hat slid past, his eyes still searching the wooded bank, but downstream now, beyond the boy’s hiding place beside the wide trunk of a black oak tree. Son of Fire relaxed his bow. He returned his arrow to the sheath slung over his shoulder. He stood, still thin and narrow, smaller than Gray Hawk, not yet man enough to grow a beard, another mark that would reveal him to be something other than what he was, a young Shawnee warrior.

Gray Hawk stood beside him and pointed across the river. “Beyond those mountains lays the valley called Shenandoah.”

The boy nodded. Piercing shards of memory flashed through his eyes. First, his mother’s scream, then thundering hooves, the whoops, and howls of red and black painted warriors, his father’s arms dropping him onto the ground. His wide-brimmed, rounded-crown, black hat aloft like a startled crow, his booted feet tripping headlong into the forest. His back, disappearing. And the boy, John Albee, light of his father’s eyes, left alone before the red and black painted warrior whose war club shattered the sky.

The boy wheeled, tiny hands balled into fists, face rage-fired screamed fury at a man four times his size on a horse that tore the ground before him.

The warrior pulled his horse hard left, leapt to the ground, and stood wide-eyed before the screaming, red-headed boy.

John Albee, barely old enough to be called a boy hurled himself into the painted man, fists flying, jaws snapping.

Gray Hawk wrapped the boy in arms stronger than the boy had ever known before, rocked his head back, and laughed. Son of Fire’s heart returned to the river bank. He looked at Gray Hawk, his brother. “Was it him?”