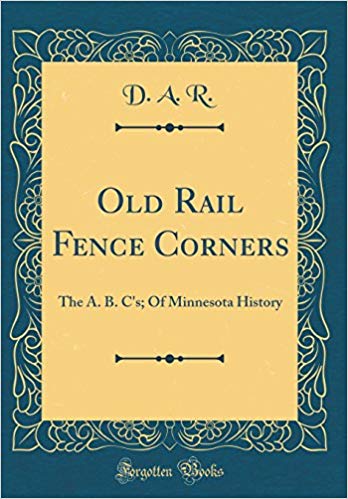 In 1911, Lucy Leavenworth Wilder Morris conceived the idea for a book to record the recollections of early Minnesota settler-colonialists. With the help of twenty-two fellow members of the Daughters of the American Revolution, Lucy recorded, transcribed, and edited the “simple anecdotes” of 154 women and men who came to Minnesota during its earliest years. The result was a book titled, Old Rail Fence Corners: The A.B.C.’s of Minnesota History. It was published by the Minnesota Historical Society in 1914, reprinted in 1915, and published as a new edition in 1976. It is a remarkable, earnest, and interesting look at what life was like for Minnesota’s early pioneers—men, women, and children who made tremendous sacrifices and lived through hardship in hopes of building a better life.

Before sharing some of the anecdotes I found most interesting, funny, or surprising, it is important to remember the context of the place and time period for which these stories take place. In 1850, shortly after Minnesota became a Territory of the United States, the non-Native population was 6,077. A decade later, the non-Native population reached 172,023. That growth was spurred by economic incentives and ornamented descriptions of the region’s beauty and potential for wealth. One such description, written in poetic form by an 1852 journalist, said: “There are its interlinking lakes, its forests wild and wide, And streams—the sinews of its strength—that feed it as they guide; Its rich primeval pastures grounds, fenc’d by the stooping sky, And mines of treasure, yet undelved, that ‘neath its surface lie.”

Migration to Minnesota was also effectuated by numerous land cession treaties between sovereign Indigenous peoples and the United States government. The most notable during this time period were the 1851 treaties of Traverse des Sioux and Mendota that opened up land west of the Mississippi river for settlement while requiring the Dakota people to move their homes onto a reservation along the Minnesota river valley. Such treaties were often lopsided arrangements satisfying the political and economic motivations of its American negotiators while exploiting Native populations. It is likely that many settler-colonialists were unaware of the financial and political arrangements that made land available to them, but not all were ignorant of their encroachment on Native territory and rights.

According to historian Gary Clayton Anderson, numerous emigrants claimed land based on the concept of “settler sovereignty” which allowed people to claim land before it was surveyed. In the spirit of settler sovereignty, many emigrants took claims on land west of the Mississippi river illegally, before the treaties were ratified by Congress. In response to the illegal settlement practices, Minnesota U.S. Representative Henry Sibley wrote to Minnesota Territorial Governor Alexander Ramsey, “Let the people go onto the purchased country in thousands if they will. Never in any case, will the land revert to the possession of the Indian.” Once a revised treaty was ratified by Congress, Little Crow, chief spokesman for the Mdewakanton Dakota, criticized the U.S. government for its greed and noted, “we have neither our lands, where our fathers’ bones are bleaching, nor have we anything.”

With this context in mind, I do believe it is important to celebrate the industriousness and hard-labor of Minnesota settlers who experienced lives of privation and sacrifice with only the hope of a prosperous future. Many of them were kind, community-driven people whose stories have value and whose lives contributed to the diverse, ever-changing, and bountiful state we know today.

When our six families got to the springs near Excelsior it was near dark and we struck the worst road we had found in the swampy land by it. The mosquitoes were dreadful, too. How dreadful, no one today can ever believe. One of the tired out men said, “This is Hell!” “No,” said another, “Not Hell, but Purgatory.” The spring took its name from that.

Has anyone ever told you how terrible the mosquitoes were in the early days? Think of the worst experience you ever had with them and then add a million for each one and you will have some idea. My little face, neck, arms, legs and feet were so bitten, scratched and sunburned that when I was undressed I was the most checkered looking young one you ever saw.”   P. 97-98

The want of salt bothered the pioneers more than anything else. Game abounded. Buffalo herds sometimes came near and deer often came through the settlement on the way to the river to drink. The streams were full of fish, but we could not enjoy any of these things without salt. However, our family did not suffer as much inconvenience as some others did. One family we knew had nothing to eat but potatoes and maple syrup. They poured the syrup over the potatoes and managed to get through the winter. Sometimes flour would be as high as $24 a barrel. During the summer when the water was low and in the winter when the river was frozen and the boats could not come down from St. Paul, the storekeepers could charge any price they could get. P. 166

At this time too, they had to watch their fields with guns, or protect them with scarecrows and have the children watch them to keep them clear from the blackbirds, which were an awful pest. There were millions of these birds and there was not a time of day when they were not hovering over the fields. These birds would alight in the corn fields, tear the husks from the corn and absolutely ruin the ears of corn; also feed on the oats and wheat when it was not quite ripe and in a milky condition. P. 171

Little Crow was often at our house and was much loved by us children. He used to bring us candy and maple sugar. My father was fond of him too, and said he was always honest. P. 233

Fortunately there was plenty of fine wood, but the cracks were so numerous and large in our houses that we veritably warmed the outdoors in keeping ourselves warm. We chopped and sawed wood every spare moment in winter and summer in order to keep the booming fires which were necessary all winter long. We used to talk and think much of the settlers who were on the prairie who were so unsheltered and far from standing timber. P. 194

The winters there were very long and severely cold and many times they would be shut in by the depth of the snow for weeks at a time. One time in particular the snow was so deep and the cold so intense that they had been snowbound so long that their supplies were almost exhausted, and my grandfather sent the men off to get a fresh supply. They were gone much longer than usual and the little family began to suffer for want of food and were obliged to go out and scrape away the snow to find acorns. They also ate the bark of trees. P. 196

Christmas in those hard times did not mean to us little pioneer children what it does now. There was no spare money with which to buy presents. We always hung up our stockings, but got nothing in them but a little cheap candy, and perhaps a few raisins. But one year, father determined to give us and the other children of the village a little better Christmas than usual. So he went out to his woods and cut enough firewood to exchange in St. Cloud for a barrel of apples. Then he divided off one end of our sitting room with a sheet and arranged a puppet show behind it. And with the village children in one end of the room eating apples, and father in the other managing the puppets, we celebrated the day in a very happy way. P. 198-199

We also built a boat here, or rather made a dugout, so we could explore the river. We had amusements in plenty, for wolves, Indians, mosquitoes and grasshoppers were in great abundance. The wolves were hungry and told us so, congregating in great numbers for their nightly concerts. We had to barricade our doors to keep them out and burn smudges on the inside to keep mosquitoes out as well. P. 213

Gary Clayton Anderson, Massacre in Minnesota: The Dakota War of 1862, the Most Violent Ethnic Conflict in American History, (Norman: University of Oklahoma Press, 2019).