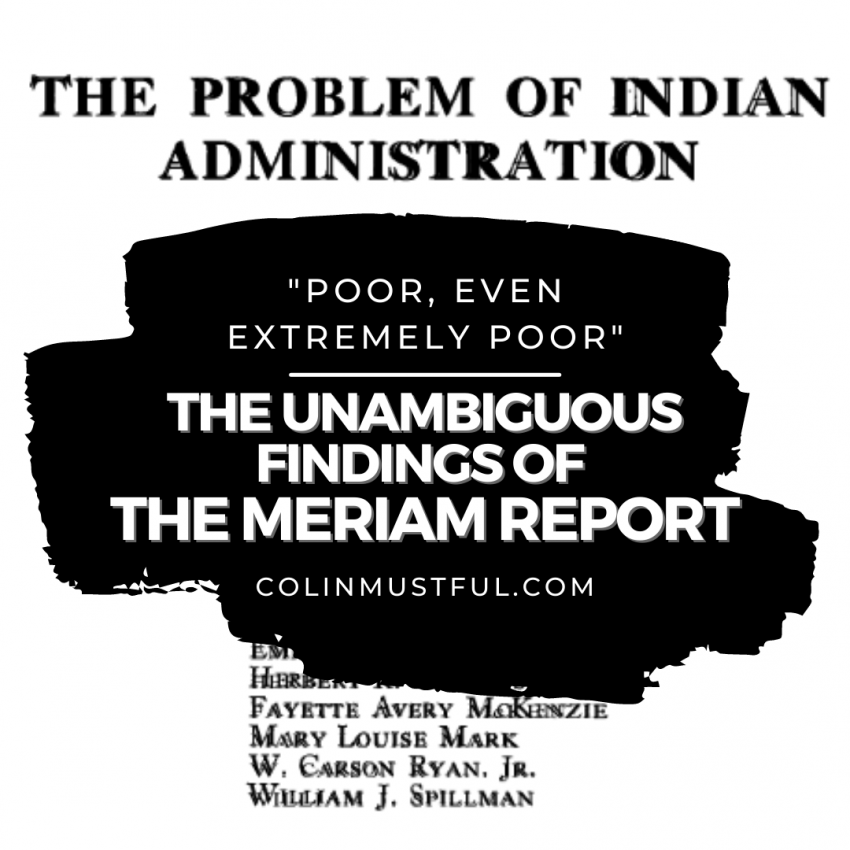 An overwhelming majority of the Indians are poor, even extremely poor, and they are not adjusted to the economic and social system of the dominant white civilization.

Dating all the way to its establishment, the United States government has a record of failed, often deplorable, and ever-changing policies toward Native American communities. Beginning in 1830, this includes policies such as Removal, Assimilation, and Termination. While the intentions of those policies can be argued (though it would be hard to argue they weren’t aimed at the dismantling and annihilation of Native people and culture), the results cannot. American Indian policy has left Native people without access to the wealth and opportunity their white counterparts enjoy. Matter-of-factly, it has left Native peoples either poor or dead. These direct results of American Indian policy were made all too clear in a 1928 report titled, The Problem with Indian Administration, more commonly known as The Meriam Report.

Commissioned by the Institute for Government Research and authorized by the Secretary of the Interior Hubert Work, the report was to be an economic and social study of Indian conditions. Lewis Meriam, a statistician who did serious work for the Census Bureau, was appointed as technical director of the survey. In an effort to be unbiased, the project was funded by the Rockefeller Foundation rather than by any department of the government. In order to conduct the survey, Meriam selected a team of specialists, some of whom were Native American. They included the following:

The team, which often worked separately in order to acquire more data, spent its first seven months visiting Native communities and reservations across the country. In total, they visited ninety-five locations in twenty-two states. They spent the next two and a half years compiling the data into an 847-page report consisting of eight major sections. Those sections included:

The report was submitted to the Secretary of the Interior on February 21, 1928. Using facts and details, the report concluded that Federal Indian policy had been a complete disaster in every aspect. They argued that the poverty seen on reservations was largely the result of the Allotment Act of 1887 which privatized Indian land. They pointed out that the land allotted to Native peoples was barren and inhospitable, calling it “lands from which a trained and experienced white man could scarcely wrest a reasonable living.” They called the system of Indian boarding schools “grossly inadequate” and argued that Indian education should no longer be segregated from the majority culture. They argued that Indian health was “bad” and that their hospitals and care systems were “characterized as lacking in personnel, equipment, management, and design.”

Overall, the Meriam Report excoriated the government’s Indian policy. But, the report did lead to the Indian Reorganization Act of 1934 which would reverse many assimilation policies and restore land and mineral rights back to the tribes. The report also led to other policy changes such as the drafting of tribal constitutions, the creation of Indian-run courts, and the strengthening of Indian police. Unfortunately, the report could not make up for the century and half of mistreatment that preceded it, nor prevent some of the detrimental policies that followed.

Colin Mustful is an independent author, historian, and publisher. His work helps readers learn and understand the complicated and tragic history of settler-colonialism and Native displacement in the Upper Midwest. He has a Master or Arts degree in history and a Master of Fine Arts degree in creative writing. He is also the founder of History Through Fiction, an independent press that publishes high-quality fiction that is rooted in historical research. Mustful believes that learning history is vital to understanding our world today and finding just, long-lasting solutions for the future.