It was a snowy April 16 when I decided to visit Little Crow’s burial site. 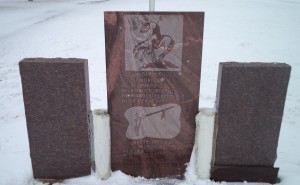 Little Crow was killed on July 3, 1863, while gathering berries near Hutchinson, MN.  He had returned from Canada and split from his band.  With the exception of his son, he was alone.  It was the end he envisioned, but not the end he hoped for…he fought for.

At the time of Little Crow’s death, there was a bounty on the head of any Dakota found in the region of the Big Woods.  When farmer Nathan Lamson happened upon Little Crow, he did not know who the great Leader was, but he knew of the bounty.  A short skirmish followed and Little Crow fell dead.

On July 4, Little Crow’s body was paraded through the town of Hutchinson.  His scalp was removed and his body was tossed in a wagon.  A few weeks later, Little Crow’s scalp was tanned, festooned with feathers, and put on display at the Minnesota Historical Society.  After a few years, the scalp, along with the skull and forearm, was moved to and displayed at the state Capitol.

It was not until September, 1971, that Little Crow’s remains were finally recovered from a storage closet at the state Capitol.  The remains were given to Little Crow’s family and brought to small church in Flandreau, SD, to be laid to rest.  There he remains with the words he once spoke now written upon his tombstone, “Therefore I will die with you.”