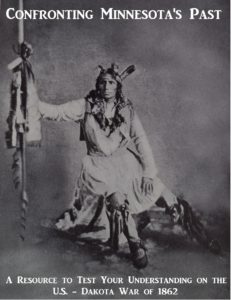 Confronting Minnesota’s Past:  A Resource to Test Your Understanding on the U.S. – Dakota War of 1862 is a comprehensive tool to help students, educators, and readers alike, better understand this important and complex part of Minnesota history.  Formatted with a series of headings and subheadings, this electronic book introduces readers to all aspects of the U.S. – Dakota War, such as people, places, events, perspectives, and cultures.

Alongside brief, but relevant articles, author Colin Mustful has included links to additional research, discussion questions, important quotes, and descriptions of historically relevant places readers can still visit today.  Also placed alongside articles are a variety of important images which include photos, portraits, sketches, and paintings.

See a Preview of Confronting Minnesota’s Past

This resource also includes primary source materials such as treaties made with the Dakota, letters exchanged at the time, and petitions sent to the President.  At the end, there is an extensive bibliography which exposes readers to a wide variety of primary, secondary, and electronic resources that can be utilized to further delve into Minnesota frontier history.

Finally, author Colin Mustful has included two scholarly essays, complete with footnotes and bibliography, which he has written about the Dakota War.  The first of which is titled, Unwarranted Expulsion:  The Removal of the Winnebago Indians and the second of which is titled, A Welcome Tragedy:  Factors that Led to the U.S. – Dakota War of 1862.

Through years of dedicated research that has resulted in the publication of three novels, Colin Mustful has compiled and edited his previously unpublished works into one all-encompassing resource on the U.S. – Dakota War and the context from which it developed.  All readers, young and old, new to the subject or well-versed, are invited to explore this book, Confronting Minnesota’s Past, and to discover for themselves what happened before Minnesota became what it is today, in all its complexity and all its tragedy.