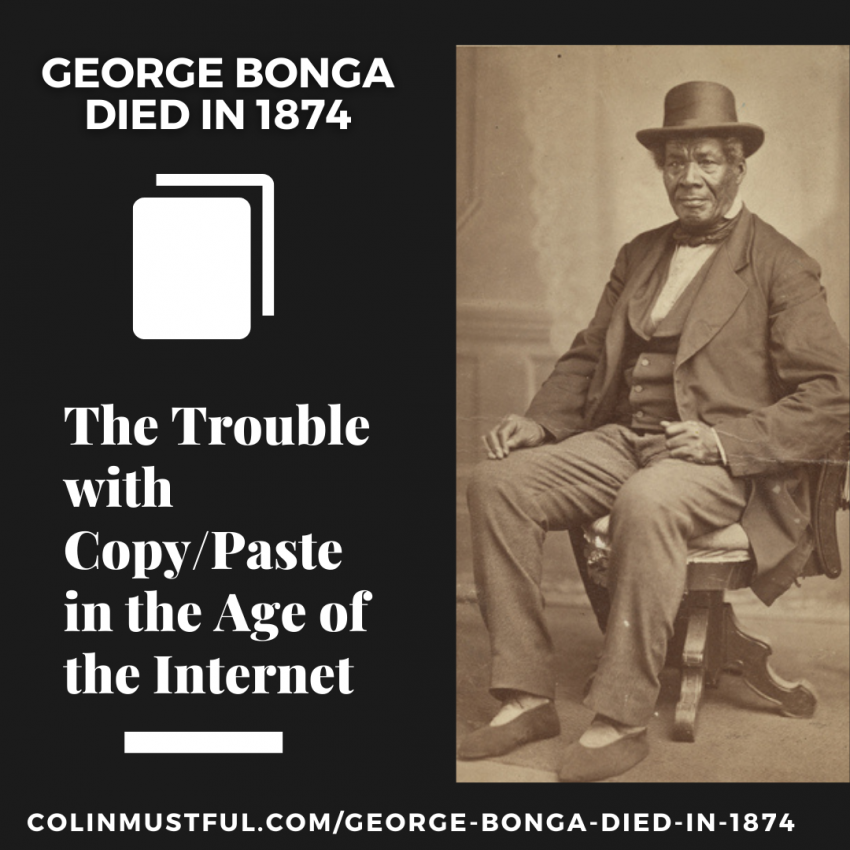 When I set out to write this blog post, I intended on sharing a brief biography of the Afro-Indigenous fur trader George Bonga. Born around the year 1802 to a black father, Pierre Bonga, and an Ojibwe mother, Ogibwayquay, George became a fur trader in northern Minnesota successfully navigating between white and Indian worlds. He was known to be a large and powerful man who was also well educated. Also, he is well-known for working as a guide and interpreter on Lewis Cass’ 1820 expedition to locate the source of the Mississippi River, for tracking and capturing an accused murderer in 1837 in what became Minnesota’s first criminal trial, and for, along with his wife, opening and maintaining a lodge at Leech Lake. He was a remarkable man deserving of the attention he’s recently received by historians and bloggers.

But, while researching George Bonga, it didn’t take long for me to notice that the date of his death is disputed, or at the very least, unclear. Some sources report that he died in 1874, others 1880, and still others 1884. It wasn’t just that the sources differed, but that they reported the date of his death without any ambivalence. (With one exception; The St. Paul History Theater stated, “Sources differ as to the year Bonga died, with some stating 1874, 1880, or 1884.”) In some cases, sources have differing death dates listed on the same document or webpage without even acknowledging their discrepancy. This made me curious. When did George Bonga die? And why do the sources differ?

I started by doing an internet search for the following terms: “George Bonga 1874”, “George Bonga 1880”, and “George Bonga 1884”. Below I’ve listed a handful of results for each search term along with any corresponding information related to Bonga’s death found within the source. You’ll notice that many sources also tried to determine his age at the time of his “reported” death. Direct quotes are italicized.

Who Was George Bonga?

While much is still unclear, I’ve been able to draw a few conclusions. First and foremost, George Bonga most likely died in 1874. While this still needs to be corroborated, I was able to find a report in The St. Cloud Journal, December 10, 1874, stating that, “The Sauk Rapids Sentinel learns that George Bonga, the well-known mixed blood Indian trader at White Earth, is dead.” Below is a screenshot of that report. The website Find a Grave reports the exact date of his death as November 30, 1874. I reached out to the author of the Find a Grave post asking for the source of the November 30th date. Unfortunately, in her reply she stated, “I can’t recall where I got the exact date of death.”

It appears to me that the reported death date of 1884 stems from an article published in the Minnesota Conservation Volunteer Magazine in 2010, which is a periodical produced by the Minnesota DNR. Toward the end of the article the author states, “When Bonga died in 1884, notice of his death appeared in newspapers in Minneapolis, Chicago, and New York.” The exact same language appears in multiple sources that were published after 2010. When I reached out to the author of the DNR article to inquire about his sources, the author replied, “Though I referenced that quote regarding Bonga’s death, I didn’t confirm the original source. Had I been doing academic work I would have.” It’s my guess that whatever his original source was, that source mistakenly reported Stephen Bonga’s date of death, which occurred in 1884, in place of George’s date of death.

I’m uncertain of the original source reporting George Bonga’s death in 1880. However, it’s likely that, since Wikipedia is such a widely used source, many subsequent sources relied on the date reported by Wikipedia. It’s possible that the same mistake that might have happened between George and his brother Stephen also happened between George and his sister Margaret who died February 6, 1880.

Regardless of when George Bonga actually died, this provides an excellent case study regarding problems that can arise while reading and writing about history. If an author, at any point, makes a mistake, that mistake has the potential to be multiplied until it becomes recognized as fact. Furthermore, this also shows a lack of care shown by many online authors. In several instances, the authors used conflicting sources but didn’t recognize the discrepancies within their own article. I’m not writing this to cast aspersions on any of these authors. In today’s digital age where content is king, writers are under a lot of pressure to add new content all the time. This can make it challenging to balance the urgency of adding more content with the necessity of verifying and corroborating your information. And, admittedly, I am guilty of many of the same mistakes.