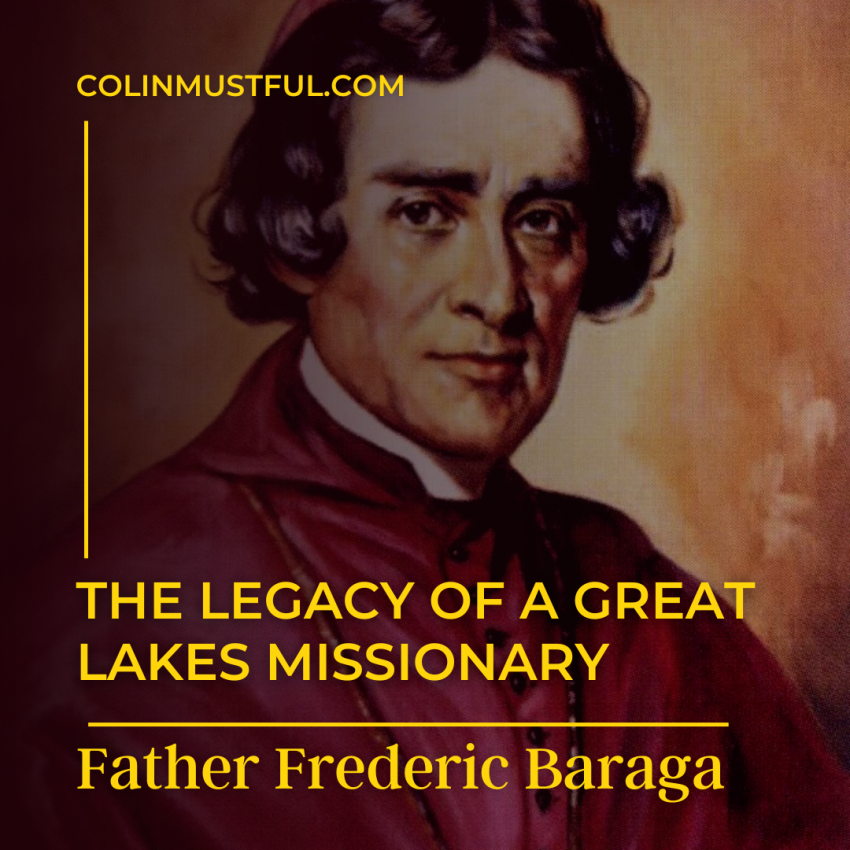 Along Minnesota’s North Shore, in the town of Schroeder, there is a large granite cross inscribed with the year 1846 just below the name “Father Baraga.” The cross is a memorial to Irenaeus Frederic Baraga, a Roman Catholic missionary who, upon learning of a possible smallpox epidemic among the Grand Portage Ojibwe, set out across Lake Superior in a birch bark canoe, to aid them. On the way, Father Baraga and his paddler Louis Gaudin, were hit by an unexpected storm and blown ashore at the mouth of what became known as the Cross River. Initially, Father Baraga put a wooden cross where the canoe landed in gratitude for having survived the journey. Later, a granite cross was erected there as memorial to celebrate Father Baraga’s fortitude and faith.

The granite cross in Shroeder, Minnesota, is just one of many historical and memorial sites in the Great Lakes area dedicated to Father Baraga. For thirty-seven years, from 1831 to 1868, he lived among the Native Ojibwe people of the region, preaching to them, learning their ways, and fighting to protect them from illegal removal efforts.

Born on June 29, 1797, in present-day Slovenia, Frederic Baraga did not discover his desire to be of service in the church until after completing law school. Immediately after graduation, Baraga entered the seminary and became an ordained Roman Catholic priest on September 21, 1823. As a priest he worked tirelessly for the care and welfare of the people, but felt called to serve as a missionary among the Ojibwe in North America. In 1830, he was granted permission to travel to America and by the end of that year he arrived in New York.

After a short stint in Cincinnati, Father Baraga was sent to L’Arbre Croche, a large Ottawa settlement in the northern region of Michigan’s lower peninsula. It was there he began learning the Ojibwe language and collecting words for what would become the first written Ojibwe dictionary. In his first year at L’Arbre Croche, Father Baraga baptized more than 150 Ojibwe families and wrote Otawa Anamie-Misinaigan, a Catholic prayer book.

After spending a few years in the unceded territory of central Michigan, in 1835 Father Baraga was sent to La Pointe on Madeline Island (Mooniingwanekaaning-minis) where the Ojibwe had requested a Catholic Priest. Within two weeks of his arrival, Father Baraga and community members constructed the first Catholic church on the island. The congregation grew steadily and by 1841 a larger church was constructed.

Over the subsequent years, Father Baraga established himself as an advocated for the Ojibwe people and their rights. During the long cold northern winters he walked hundreds of miles to various Ojibwe communities attending to their needs. These efforts earned him the nickname “The Snowshoe Priest.” Through a series of treaties, the U.S. government continuously sought to remove the Lake Superior Ojibwe from their lands. Using his background in law, Father Baraga also fought against these illegal removal efforts and helped the Ojibwe protect their right to use and remain upon their traditional homelands. On some occasions, Father Baraga would even purchase lands so that there would be no threat of removal, and then give the deed to Ojibwe leaders.

Throughout the years, though Father Baraga worked tirelessly and had few comforts or luxuries, he wrote, “I am happier in my little room than so many of those who live in gilded palaces.” Father Baraga, who was consecrated bishop on November 1, 1853, died January 19, 1868 in Marquette, Michigan. During the course of his ministry, he baptized and confirmed over 1,000 people in the region. On May 10, 2012, Pope Benedict XVI declared Father Baraga “Venerable.” Today, there is an effort to make him a Catholic Saint.

This blog post was inspired by the website “Father Baraga and the Ojibwe Natives.” The site takes an extensive look at the life and work of Father Frederic Baraga. But, more importantly, it examines the legacy of missionary work among Native populations during the 19th century while providing visitors to the site with a wealth of information and resources. One aspect of the site worth highlighting is its “Truth and Healing” section. Here the authors of the website acknowledge the damage Catholic actions have had on Native communities and culture while pointing visitors toward vital initiatives to resolve past and current harms.

Colin Mustful is an independent author, historian, editor, and publisher. His writing helps readers learn and understand the complicated and tragic history of settler-colonialism and Native displacement in the Upper Midwest. He has a Master of Arts degree in history and a Master of Fine Arts degree in creative writing. He is also the founder of History Through Fiction, an independent press that publishes high-quality fiction that is rooted in historical research. Mustful is an avid runner and soccer player who lives in Minneapolis, Minnesota. He believes that learning history is vital to understanding our world today and finding just, long-lasting solutions for the future.