Authorial Intrusion and the Civil War Narrative: How to Write History Through Fiction 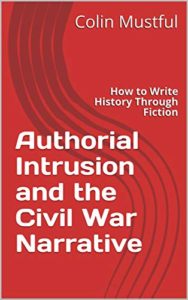 Historical fiction is one of the most popular literary genres. When done well it brings history to life, teaching readers about important historical people and events while also evoking profound, relatable emotions through its characters. But how does the historical author balance history and fiction? In this craft essay, historian and author Colin Mustful carefully examines four Civil War narratives and identifies how each author incorporates important historical details into their novels without disrupting the fictional dream. Mustful, who is the author of several historical novels, identifies the elements that make a historical novel effective and engaging—he shows readers and writers alike how to write history through fiction.

The Generation of 1837: Attitudes, Policies, and Actions Toward Indian Populations of Argentina

Unabashed Hypocrisy: A Dichotomy of Values

The acronym by which Papa John’s operates is known as FASPAC.  This stands for:  Focus, Accountability, Superiority, People Are Priority Always (PAPA), Attitude, and Constant improvement.  This acronym represents the said values of the company at a general, all-encompassing, and macro-level.  It is unspecific.  It is, at the farthest reaching level, a method of quality control created to instill within all of its team members the company’s core values.  I do not seek to debunk FASPAC.  I admire the values laid out in the acronym.  Furthermore, I believe that Papa John’s, at every level, seeks and succeeds to achieve these values.  However, to a larger degree, I believe that Papa John’s alienates itself from these values far too often.  Essentially, what I have witnessed through thirteen years of experience is an unabashed hypocrisy to Papa John’s’ core values.  I am confused by this hypocrisy because I admire the work, the people, the system, and the success of Papa John’s Pizza.  But it is this dichotomy between what the company says and what the company does, that leads to the following essay.  Perhaps this dichotomy cannot be reconciled, but it must at least be articulated and then thoughtfully considered.

The Tobacco Controversy of 1857: An Early Debate and Its Delayed Results

In May 1851, the Great Exhibition was held at London’s Hyde Park.  The exhibition was a grand display of modern industrial technology, design, and innovation.  It represented a move toward industry and capitalism that continued well into the twentieth century.  At the time, Britain was the leader in industrial growth as well as imperial expansion. In order to achieve this, the nation relied on endless numbers of low-class, low-wage labor as a foundation to fledgling capitalism. Long hours and deplorable conditions were commonplace as a result of what Karl Marx called unbridled selfishness.

Alongside a growth in industry was the growth of media.  This became apparent through the daily coverage of the Crimean War.  Reports given by William Howard Russell of The Times were an historical innovation that allowed people to follow the events of the Eastern campaign. The newspaper became the instrument of information and made possible the sharing of opinions.  In addition to media expansion, tobacco smoking also emerged from the Crimean War.  Western observers took to the habit, and with their newfound capitalist ambition, brought the habit back to England to be exploited. It was not long before the addictive narcotic enamored the British people, especially its workers.  Though smoking had previously been engaged in, never had it become so public than after the Crimean War.  The new accessibility of the press and the constant industrious attitude of advancement developed a setting for wholesome dispute.  In 1857, this led to the Tobacco Controversy, a discussion held in the pages of The Lancet debating the effects of tobacco smoking on the character and well-being of its users.

A Welcome Tragedy: Factors that Led to the U.S. – Dakota Conflict of 1862

On December 26, 1862, the United States Government hanged thirty-eight Dakota Indians in Mankato, Minnesota, for their participation in what is known as the U.S. – Dakota Conflict of 1862. This remains the largest mass execution in U.S. history. But the hangings and the depredations that preceded them were not the result of an isolated incident or event. The Conflict did not occur by chance. Rather, it was the foreseeable result of years of misconduct, fraud, and exploitation. Recommendations were made and warnings were given, but nothing was done. The Indian System fostered neglect, nourished corruption, and welcomed tragedy.

Unwarranted Expulsion: The Removal of the Winnebago Indians

The Battle of Point Pleasant: A Critical Event at the Onset of a Revolution

Throughout the nineteenth century the issue of tobacco smoking was an area of constant debate. In 1857 this debate became public through the pages of the British medical journal the Lancet in what is known as the Tobacco Controversy of 1857. The controversy in Great Britain initiated a thorough discussion over the effects of tobacco smoking in America. The debate was vibrant, but at the time it led to no significant results. However, the controversy created public awareness about the possible effects of tobacco smoking and laid an important foundation for future discussion, research, and legislation.