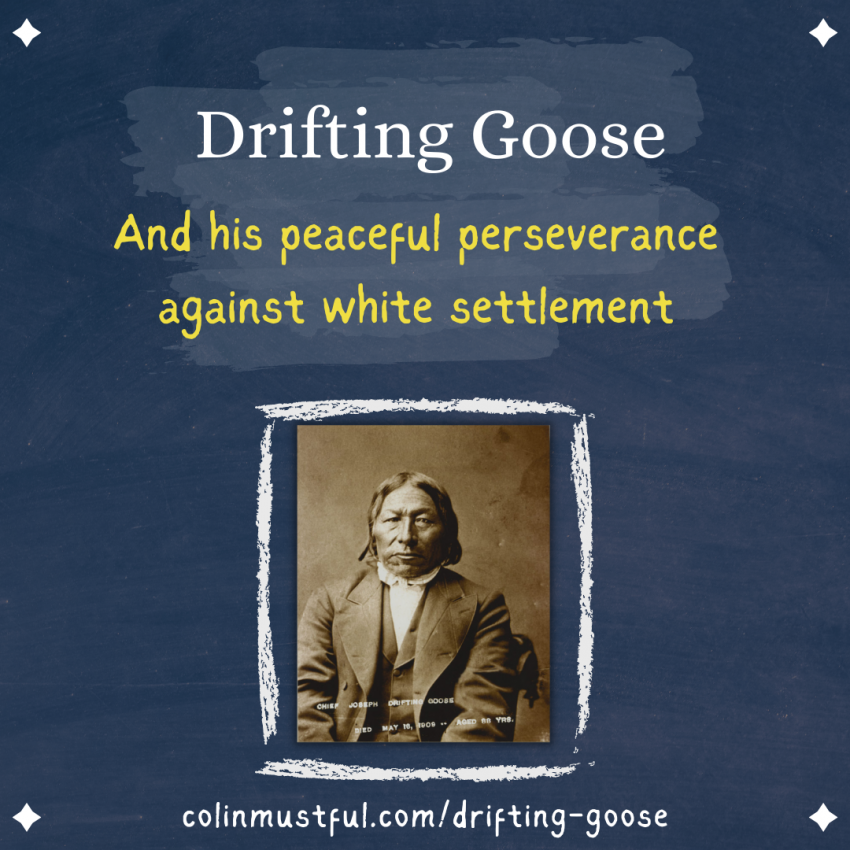 Magabobdu, or Drifting Goose, was a Hunkpati Sioux chief who never signed a treaty with the U.S. government and is known for his resistance of white settlement and railroad development upon his peoples’ land. Born in 1821 near present-day Redfield, South Dakota, Drifting Goose and his band of Hunkpati Sioux lived a semi-nomadic life in and around the James River Valley. At just the age of nineteen, Drifting Goose became the chief of his people. It was at that time, in 1840, when his band of approximately three hundred members established a permanent camp in abandoned earth lodges on an island, now called Armadale Island, in the James River. While there, they were known to live a prosperous life in which they cultivated corn, gathered berries and wild turnips, raised stock, and hunted the scattered groups of bison that roamed the western plains.

Life for Drifting Goose and his band began to change in 1851 when the Sisseton and Wahpeton signed the Treaty of Traverse des Sioux. The treaty, which opened up twenty-four million acres of land to white settlement, included lands stretching as far west as the James River. Settler-colonists quickly poured into the region. Rather than resort to violence, the Hunkpati Sioux implemented intimidation tactics as a way of “unwelcoming” settlers. These tactics included pulling up survey sticks, taking or damaging equipment, and running off livestock. The strategy was quite successful at warding off encroaching settlers and developers until 1856 when a detachment of U.S. soldiers arrived to secure a townsite of white settler-colonists. But, even with the troop presence, Drifting Goose effectively kept settler-colonists out of the James River Basin.

The next setback came following the U.S. – Dakota War of 1862. In August of that year the Dakota Sioux, in retaliation for years of mistreatment, attacked the white settlements and government agencies in southwestern Minnesota. The Dakota won several victories, but after a series of battles they were defeated and their people were exiled to a reservation at Crow Creek, South Dakota. In the aftermath of the war there was a severe mistrust among the white population of all Native peoples in the area. There was also a $25 bounty put on all Dakota found within Minnesota. As a result, many Dakota fled west to the James River region. Additionally, the white settlers at Sioux Falls moved west to Yankton at the confluence of the Missouri and James Rivers, further encroaching on the homeland of Drifting Goose and the Hunkpati Sioux.

A few years later, in 1868, leaders from the Lakota people, Yanktonai Dakota, and Arapaho Nation signed the Treaty of Fort Laramie. The treaty established The Great Sioux Reservation west of the Missouri River in present day South Dakota. But, like the treaties before it, Drifting Goose did not sign the treaty or agree to its terms. Nevertheless, in the years following the treaty settlement increased in the James River region while more surveyors also made their way into the territory. Like he had before, Drifting Goose and his band repelled the settlers and surveyors through nonviolent means while continuing to live a prosperous, mostly agricultural life.

Then, in 1878, Drifting Goose was ordered to leave the James River region and resettle at the Crow Creek Reservation. Drifting Goose reluctantly agreed. But because of his peaceful perseverance, Drifting Goose had earned the support of many influential whites such as the Reverend Henry B. Whipple and General Henry Hastings Sibley. In fact, shortly after Drifting Goose was resettled at Crow Creek, Sibley wrote a letter to the authorities in Washington D.C. arguing that Drifting Goose and his people should be “protected in possession” of their lands. As a result, in 1879, President Rutherford B. Hayes signed an executive order establishing the Drifting Goose Reservation.

Unfortunately, by 1879, settlement in the James River Valley had increased to such a degree that conflict and disagreements were inevitable. Upon moving back to their homelands, Drifting Goose’s band demanded that all whites who had settled upon the reserved lands should be expelled. According to historian George W. Kingsbury, “They entered the houses of settlers when the men were not at home, and insulted and hustled the women, forcing the women to cook for them. They boldly entered the cornfields, husked the corn and carried it away in sacks. They informed the settlers that the country was theirs and all the whites would be compelled to leave; that the agent from Sisseton was coming over and would put them in possession.” Because of this, just a year after the establishment of the reservation, Drifting Goose and his people were ordered back to Crow Creek.

Though Drifting Goose never returned to live upon his homeland, he continued to fight for the rights and advancement of his Nation. One of his most lasting legacies was the establishment of a school on the Crow Creek reservation. Also, in 1888, he and a large group of Sioux leaders traveled to Washington D.C. in response to the Dawes Allotment Act. Drifting Goose died in 1909 and was buried on the Crow Creek reservation. Today, a road at Fort Thompson is named after the great leader who is known as one of the last bastions of Native resistance to white settlement.