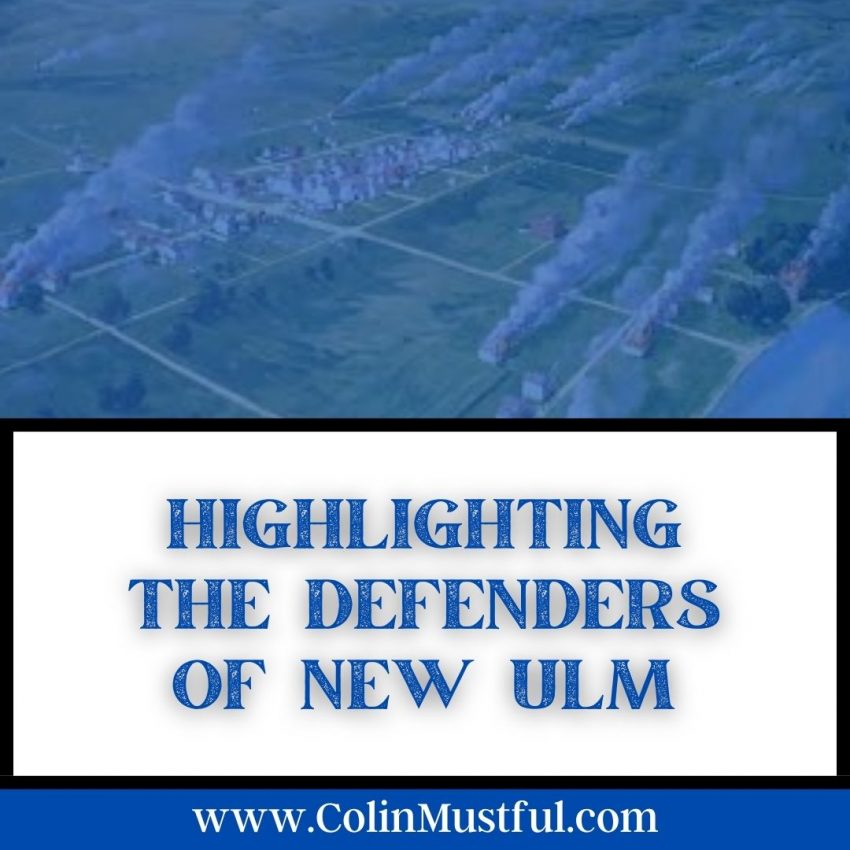 In the summer of 2017, while traveling through western Minnesota, I stopped at the Acton State Monument—a small stone obelisk that, according to the inscription, marks the spot where the first blood was shed in the Sioux Indian Outbreak Aug. 17, 1862. While signing the visitor book I saw the name Curtis Dahlin just above my own. Dahlin, in my world, is a mega-celebrity. A Minnesota historian, Dahlin has written at least a dozen nonfiction books related to the U.S. – Dakota War of 1862, all of which are extensively researched. As I learned from the visitor book, Dahlin and I live in the same city.

A few weeks after stopping at the Acton State Monument, I connected with Dahlin and made a visit to his home. We had a nice conversation, and I learned that he had gone to Acton while researching his next book, A Guidebook to the U.S.-Dakota War of 1862 in Minnesota, which was published in 2019. Before leaving, Dahlin gave me a signed copy of one of his other books, Dakota Uprising Victims: Gravestones & Stories. The book is a remarkable feat of research. In it, Dahlin tracks down the surviving gravestones and markers of those white Minnesotans who were slain during the U.S. – Dakota War. While the book is remarkable in its breadth of geographical and biographical data about the victims, Dahlin points out that it only represents “one-third of the estimated 600 white settlers and soldiers who were killed by the Dakota” and “this means that about two-thirds of the victims lie in unmarked graves.”

The Minnesota Historical Society estimates that more than 600 whites were killed during the war. However, as noted by Dahlin, that number may have been much higher. And, according to a 42-page list of victims published by the Family and Friends of Dakota Uprising Victims, that number could be as high as 2000. But I don’t wish to argue the number of casualties for any one side of the conflict, nor the long-lasting effects on the people, places, and families—Native American and White—in the aftermath of the war. What I do wish to acknowledge, is that there were many brave, selfless people who gave their lives in defense of their communities. And because I’ll be speaking at the 2022 U.S. – Dakota War Commemoration in New Ulm, Minnesota, I’d like to highlight a few defenders of New Ulm who gave the ultimate sacrifice when the Dakota attacked the town on August 19 and August 23. The motley crew of defenders, most of whom were farmers, merchants, and volunteer militia, successfully repelled the Dakota attacks and then made the difficult decision to evacuate the town on August 25 and burn down the remaining buildings. The three defenders highlighted here are included in Dahlin’s book, Dakota Uprising Victims: Gravestones & Stories.

Captain William Bigelow Dodd was the second in command of the forces defending New Ulm. In the afternoon of August 23, 1862, Dodd, along with a small company of men, charged the Dakota lines in order to allow what they believed were white reinforcements to enter the town. What they thought were reinforcements, however, were actually Dakota dressed up like white men. After recognizing the trap, Dodd hurried back to the safety of the town barricades but was shot three times during his retreat. He made it back to town but died shortly thereafter.

Dodd was born April 21, 1811 in Bloomfield, New Jersey. He came to Minnesota when it was still just a U.S. territory and is credited with founding the town of St. Peter. He was a member of the volunteer militia that traveled to Spirit and Okoboji lakes to save and protect white settlers in the immediate aftermath of the Spirit Lake Massacre of 1857. In 1854 he was commissioned to oversee the construction of a new military road from Fort Atkinson, Iowa to Fort Snelling in Mendota, near St. Paul, Minnesota. Today, Dodd Road in Eagan is named after him.

Jacob Castor was a baker living in New Ulm who was mistaken for a Dakota and killed by friendly fire. As reported by Dahlin, on August 23 Castor, who also acted as a soldier in Captain John Bellm’s company, was baking bread to feed the New Ulm Defenders. As evening approached, rain began to fall. When Castor left his bakery with baskets of bread, he covered his shoulders and head with a blanket, a common manner of dress for the Dakota Indians. In the dim light of dusk he was mistaken for an Indian and shot. He got back up and tried to make it to his home, but was shot again. He died the next morning. Castor, an immigrant from Prussia, was just 30-years-old.

William Luskey was a member of the LeSueur Tigers, a militia group under Captain William Delaughter that came to the relief of New Ulm once word was received that the town was under attack. By the time of Dakota’s second attack on August 23, the population of New Ulm swelled to more than 2000 people as refugees and reinforcements, like the LeSueur Tigers flooded the city. The defenders built makeshift barricades around the city center and posted men at outlying buildings. Luskey and a small group of men were posted at the Robbecke Mill because it was a tall structure that provided an excellent defensive position. During the hotly contested battle, some of the men left the mill for other positions. The thirteen that remained, one of which was Luskey, finally decided to leave and burned the mill down upon their departure so that it could not be used by the Dakota. Luskey was killed sometime thereafter, but it isn’t known exactly how or when. Luskey was one of twenty-six people killed defending New Ulm that day and one of six LeSueur Tigers killed.

William Luskey was born in Ireland in 1815. His wife Johanna and their children lived on a farm in Tyrone Township in LeSueur County. He was 47-years-old at the time of his death.