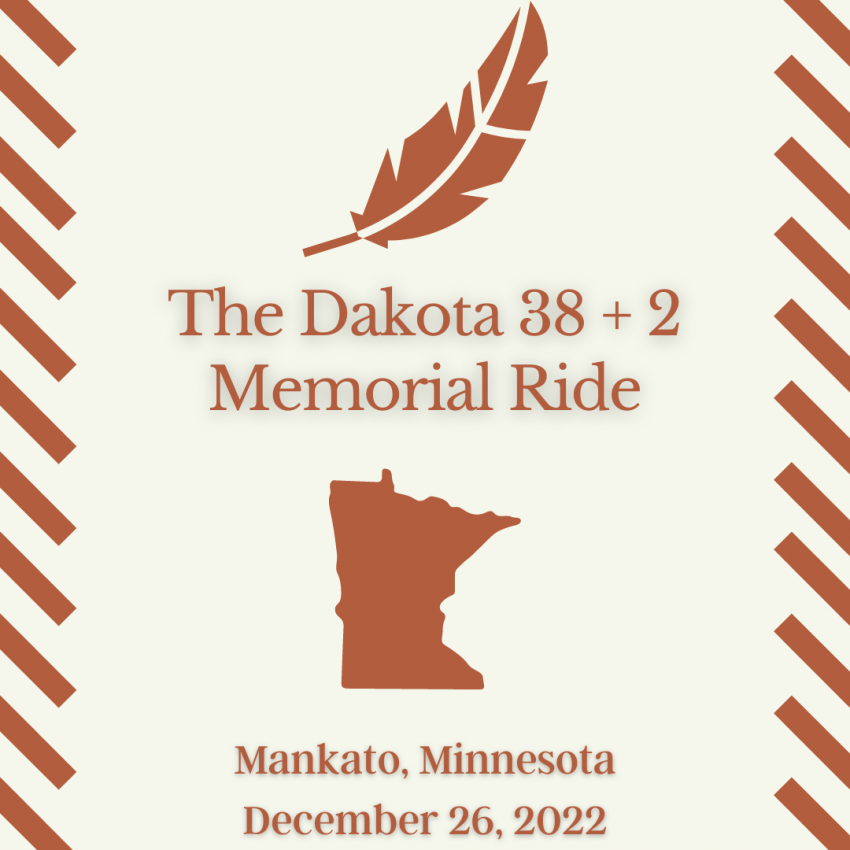 Today, bitter cold winter temperatures could not prevent hundreds of people from gathering at Reconciliation Park in Mankato, Minnesota to welcome the Dakota 38 + 2 Memorial Riders and Runners. The event, started in 2005 by Lakota spiritual leader Jim Miller, commemorates the infamous hangings of 38 Dakota men that took place in Mankato on this day in 1862 in the aftermath of the U.S. – Dakota War. It also commemorates the hanging of Little Six and Medicine Bottle, two Dakota men were apprehended in Canada and hanged at Fort Snelling on November 11, 1865, for their roles in the U.S. – Dakota War.

The riders of the memorial event traveled on horseback from the Lower Brule Reservation in South Dakota to Reconciliation Park in Makato, a journey of 330 miles. They began their journey on December 10 and traveled through bitter cold and harsh winter storms. The journey represents the exile from their homeland that the Dakota people endured in the months after the mass hanging. At the time, the Dakota, who were perceived as a violent threat by the majority white population of Minnesota, were banned from the state by law, forever.

In addition to the riders, a large group of relay runners also arrived at Reconciliation Park as a part of the memorial event. These runners began from Fort Snelling at midnight the day before, finally arriving at Reconciliation Park, a distance of about 90 miles, at 10:30am, December 26. The runners then proceeded to Land of Memories Park to conclude their relay. The run itself represents the long walk of those Dakota who, in November 1862, were forced to march from the Lower Sioux Reservation to Fort Snelling. Once they arrived at Fort Snelling, they were imprisoned in a concentration camp just below the fort where hundreds died during the cold, hard winter.

The completion of the ride in Makato today was a joyous, reflective, and grief-filled occasion. The riders were welcomed with applause and celebratory drum beats and shrieks. This was followed by several speeches from Dakota elders who spoke of the pain this history has brought while also honoring those who endured such suffering. As a part of honoring them, each of the 40 names of those hanged were read aloud and remembered with a loud trill of the drums. Speeches from elders continued as they also honored those like Jim Miller who had the strength and foresight to create, organize, and maintain the annual memorial ride. Finally, they spoke of reconciliation. They spoke of continued acknowledgement of past wrongs while working together with state officials, like Governor Tim Walz and Lt. Governor Peggy Flanagan who were present, to create a future that heals the wounds of the past and incorporates the needs and viewpoints of all Minnesotans.

Once the speeches ended, the riders unsaddled their horses and departed with their trailers most likely toward warm food and rest. At the park, people huddled close to the buffalo statue while listening to Dakota musicians play their traditional songs. Others made their way to the library just across the street from the park where they watched a presentation of the Dakota 38 + 2 documentary.

With temperatures just barely above 0 degrees Fahrenheit, it was a cold day in Mankato. But that’s what makes us a part of this place. And that also makes us a part of its history. All of us. The events of the past have deep, meaningful, and real impacts for us today. There’s value in coming together, to see the past for what it was, and to push on toward the next steps—the next generations. The memorial riders and runners have truly shown us what it means to hurt and to heal. It’s an example I hope they continue to set. It’s an example I hope all Minnesotans can learn from.

Colin Mustful is an independent author, historian, editor, and publisher. His writing helps readers learn and understand the complicated and tragic history of settler-colonialism and Native displacement in the Upper Midwest. He has a Master of Arts degree in history and a Master of Fine Arts degree in creative writing. He is also the founder of History Through Fiction, an independent press that publishes high-quality fiction that is rooted in historical research. Mustful is an avid runner and soccer player who lives in Minneapolis, Minnesota. He believes that learning history is vital to understanding our world today and finding just, long-lasting solutions for the future.