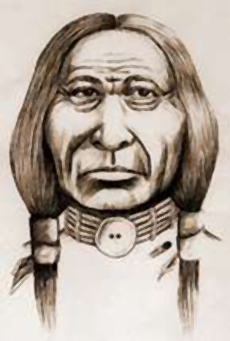 My name is Inkpaduta, known as Scarlet Point to the whites.  I do not know the exact date or location of my birth, but it has been said that I was born near present day St. James, Minnesota, in the year 1815.  I belong to the Wahpekute band of Dakota Indians.  I have become infamous for my role as the instigator of the Spirit Lake Massacre of 1857.  Some, however, view me as a hero who defended Dakota tradition and our way of life.

I enjoyed an adventurous and fun childhood among the picturesque and pleasant lands of what is now southwestern Minnesota.  I did not know of or see the white man when I was a young child.  But life was changing.  Fort Snelling was built in 1819 bringing with it scores of settlers looking for a new and abundant life.  Soon traditional food sources became scarce, disease spread, and intertribal warfare against the Ojibwe in the north all began to take its toll on my people.

By 1840, my father Wamdisapa, decided that we should move from our homeland and instead settle along the James River in present day South Dakota.  Here my family and our small group of Wahpekute Dakota Indians could maintain a life that was nomadic and free, like our ancestors.  Over the following years my band of Wahpekute Dakota roamed through parts of northern Iowa which had been vacated by the Sac and Fox tribe after signing a treaty with the U.S. Government in 1842.  But this area was quickly becoming settled.  This began to threaten our way of life . . . a life we had known since the beginning of time.  In 1832, Iowa had fewer than fifty white settlers, but by 1844, when Iowa became a state, there were as many as 200,000 settlers.

In 1851, the Dakota Indians sold their lands and agreed to live on a reservation as a means of survival.  I and my band did not agree to or sign this treaty, yet we were told we had to abide by it.  Over the next few years my band and I continued to live a traditional, nomadic lifestyle.  At times we harassed settlers in order to protect our way of life, but most often lived peaceably and got along well with our white neighbors.

Things changed in 1856.  It began with the murder of my brother-in-law, a Wahpekute chief named Sintominiduta.  He was killed by a white settler named Henry Lott.  Then, on December 1, 1856, there was a tremendous, three-day snow storm that threatened the survival of everyone in the region.  Because the settlers were afraid of running out of food, they decided to form a militia and confiscated our guns.  They told us we had to leave the region though they were living on our land.  Without our guns we would be unable to hunt and survival would be impossible.  And so we retaliated by killing the approximately forty people who had encroached on our land near Mini-Wakan, a place they call Spirit and Okoboji Lakes.

The white people tried to capture and punish me and my band of Wahpekute Dakota.  They forced our own people, the Dakota of Minnesota, to try and find us.  But all attempts were unsuccessful.  We moved west where the land was too vast and the population too sparse to locate us.

Never again did I initiate an attack on the white people.  However, I did take part in several battles when the white army tried to attack and kill my people.  I lived the rest of my life on the run along with many of my people.  We did not seek war.  We only sought to maintain our customs and traditions and to live free from white encroachment.  I was never captured or punished for my role in the events at Spirit Lake, which I do not believe they were crimes at all.  I was defending my people and my culture.  I died of pneumonia in Canada in 1879.