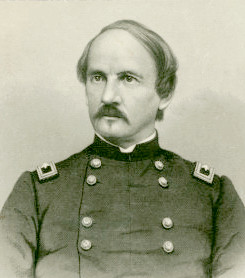 My name is Henry Hastings Sibley.  I was born on February 20, 1811, in Detroit, Michigan.  My parents came from Massachusetts and had migrated west shortly after the American Revolution.  My father was a prominent judge and so I spent much of my youth reading and studying law.

In 1828, I obtained my first job working as a clerk at a mercantile house in Sault Ste. Marie.  This was the center of Fur Trade, a huge North American industry at the time.  I worked hard and soon I was promoted to a supply purchasing agent for the American Fur Company.  Then, in 1834, I became a partner with the American Fur Company and moved to their headquarters in Mendota, near the confluence of the Mississippi and St. Peter’s Rivers (Minnesota River).

I lived in a beautiful and lush land where Indians roamed and traders did business.  Fort Snelling, the great military garrison, was nearby and this is where I conducted most of my business.  I even built my home just across the river from the Fort.  It was the first stone house in Minnesota and you can still visit it today.

In 1839 I married a Dakota woman who was the daughter of a Mdewakanton Dakota chief.  We had one child together.  Though my marriage did not last long, it helped me establish important and lasting kinship and business ties with the Dakota people.  I became friends and hunting partners with the great Chief Little Crow.  The Indians often came to my home and we exchanged pleasantries.  Because I was a tall man, they liked to call me “The Long Trader.”

I remarried in 1843 to Sarah Jane Steele, the daughter of a military commander and brother of Franklin Steele, an enterprising businessman.  I quickly became the most prominent fur trader in the region of Minnesota and I helped to monitor other traders working for the American Fur Company.  But, by the mid 1840’s the trade was dwindling and so I sought new ventures in business, politics, and in the making of Indian treaties.

In 1848, I was elected as a Representative in Congress for the Territory of Wisconsin.  Then, just a year later, I was an integral member of the Stillwater Convention which determined that Minnesota should become its own territory.  In 1851, I helped write and negotiate the Treaties of Traverse des Sioux and Mendota when the Dakota Indians sold their land west of the Mississippi River.  These treaties were essential to me and other traders because the Indians were indebted to us for a lot of money which they could not pay back with furs.  As a result of the treaties, I received $97,000 that was owed to me.  Today that would be about three million dollars.

When Minnesota became a state in 1858, I was elected as its first governor.  In my inaugural address I told the people of Minnesota that, “I have no object and no interests which are not inseparably bound up with the welfare of the state.”  A few years later I retired from politics, but when the Dakota War broke out in 1862, I was appointed as colonel of the state militia.  I was put in charge of volunteers who had little military experience since the regular army was away fighting in the American Civil War.  It was my job to stop the Dakota War, capture the Dakota Indians responsible and safely recover their captives.

When war broke out the people of Minnesota were angry and they wanted me to capture the Dakota immediately.  But I had to be careful in order to protect and save as many lives as possible.  People criticized me for the slowness of my campaign, but in the end I was successful in stopping the Dakota War and rescuing the captives.  After the war I was rewarded with a promotion and named Brigadier General.  I headed the military commission that put the Dakota Indians on trial and sentenced them to death for their crimes in war.  Thirty-eight Dakota men were eventually hanged in Mankato, Minnesota as a result of these trials.  In 1863, I led a punitive military expedition in the Dakota Territory in order to find and capture all remaining Dakota Indians.  This is because many Minnesotans at this time wanted to punish any Dakota Indians that had taken part in the Dakota War but who were still at large.

After my military service ended in 1866, I lived a quiet life in St. Paul.  I joined several civil organizations which included the Minnesota Historical Society.  I died in St. Paul on February 18, 1891.