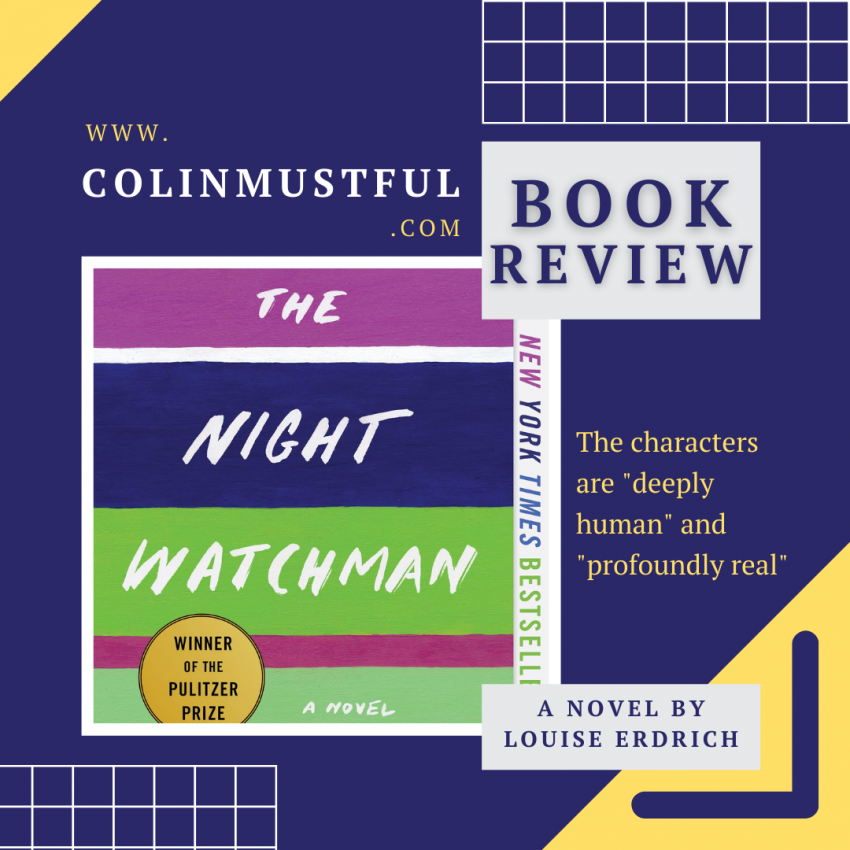 On a small Indian Reservation in northern North Dakota, Thomas Wazhashk, the night watchman at the Turtle Mountain Jewel Bearing Plant, is struck by the words of a government bill. Those words—to provide for the termination of—were part of a 1953 government bill that sought to end all federal supervision of American Indian tribes and abrogate all treaty arrangements. Thomas knew that this policy would be disastrous for his people and he was determined to stop it from happening.

As Louis Erdrich’s Pulitzer Prize winning novel opens, it’s clear that although life isn’t perfect at the Turtle Mountain Indian Reservation, it is filled with tradition, freedom, and hope. Life is rooted in the past, with few, if any, modern conveniences available for the hard-working but poverty-stricken Turtle Mountain Chippewa. While Wazhashk works as the night watchman, Pixie Paranteau is one a handful of young women who work the most coveted manufacturing jobs because they scored higher in manual dexterity than did men. The story progresses when Wazhashk, who is the fictional representation of Erdrich’s grandfather Patrick Gourneau, recognizes that the new Indian Termination Policy is detrimental to his people and would strip them of their remaining lands. A skilled writer, Thomas quietly goes about fighting the bill through a variety of written correspondences while organizing a delegation to Washington D.C. Pixie goes on her own mission to find her sister, Vera, only to be lured into strange new job at a Minneapolis bar. She returns to the reservation without Vera. Instead, she comes back with Vera’s son and the beginnings of a relationship with Turtle Mountain boxer Wood Mountain.

As Wazhashk goes to work each night, and helps organize against the bill each day, Pixie longs to see her sister again while discovering who she really is as a woman, sister, daughter, and friend. The novel continues this way, bringing various characters in and out of the story through short but deeply revealing chapters. Almost hidden between the personal details of each character’s life, are actual facts and commentary from this episode in time when Patrick Gourneau and the Turtle Mountain Band of Chippewa fought against termination. In the end, all the stories connect for an ambiguous but realistic conclusion.

You cannot feel time grind against you. Time is nothing but everything, not the seconds, minutes, hours, days, years. Yet this substanceless substance, this bending and shaping, this warping, this is the way we understand our world.

There are many praiseworthy elements of Erdrich’s story, as made evident by its status as a Pulitzer Prize winning novel. What I found most endearing was the absence of a clearly identified hero. Titled “The Night Watchman”, I began the novel believing that Thomas Wazhashk, as the central figure, would be the hero—the man who takes on the power of the U.S. Government and defeats it. Rather, there’s a subtly to Thomas’ life and actions that portray him not as a hero, but as a man. The same can be said for each character in this novel. They are not heroic figures or caricatures that exist to prove a point or embellish an important historical moment. They are deeply human and therefore profoundly real.

By fully humanizing her characters—by making each character the main character of their own story—Erdrich has created historical fiction in its truest form. This is life, the author seems to be saying. It is a people cast aside by the dominant society, left to live in poverty and grief, but who exist every day to work, love, live, hope, dream, and fight for themselves and their futures. Consider Millie Cloud, for instance, the young Chippewa Scholar brought in from Minneapolis to give Congress an economic study of reservation conditions. Millie does not swoop down from the rafters with a sword and shield, though it would have been easy, and probably tempting, to write Millie as a gallant, fearless figure. Instead, Millie is a reluctant hero who is rather naive about her people and the historic legacy they carry. Millie, like all the characters in the novel, plays her role while struggling to navigate her own life and feelings. And isn’t that what we’re all trying to do?

Millie knew enough from her interviews to understand that being adopted by a Chippewa was a special mark of friendship and honor. But for some reason what Patrice said didn’t make her feel all one way. She was both happy and for some reason disappointed. And her feelings ran on this way in the silence. Companionable though it was, she felt unsettled and was left wanting by what Patrice had offered. It was as if a marvelous design had flashed before her, and disintegrated, before she could grasp the figures it conveyed.

The contributions of the 1954 Turtle Mountain delegation to Washington D.C., the Chippewa boxers who fundraised for the trip, and the scholars who wrote the economic study cannot be understated. As Erdrich notes in her afterword, they were the first to mount a defense against the termination policy and prevail. Before the policy was finally ended in the 1970s, 113 tribal nations were terminated by the U.S. government resulting in the loss of 1.4 million acres of tribal land. The policy, like so many before it that sought to solve the “Indian Problem,” was an utter disaster for Native American peoples. Erdrich makes this clear, but not with heroic, larger-than-life characters or vicious, ugly villains. There are no cliches or grandiose statements. Nor does she rely on facts or figures to prove her point. Erdrich creates real people living under real circumstances, each one with their own set of deeply personal thoughts, feelings, and decisions to make. Ultimately, it is quite remarkable to get to know these people, to empathize with their situations, and to understand that they are not heroes. They recognized injustice and decided to do something about it. We can do the same thing.

Colin Mustful is an author, historian, publisher, and editor. He is the author of four historical novels and the founder and editor of his own press, History Through Fiction. He has a Masters degree in history and a Master of Fine Arts degree in creative writing with a concentration in publishing. His books combine elements of fiction and nonfiction to tell compelling and educational stories. Learn more and purchase Colin’s books at https://colin-mustful.square.site/

Want a copy of The Night Watchman? Get a discount by buying yours in my online shop.