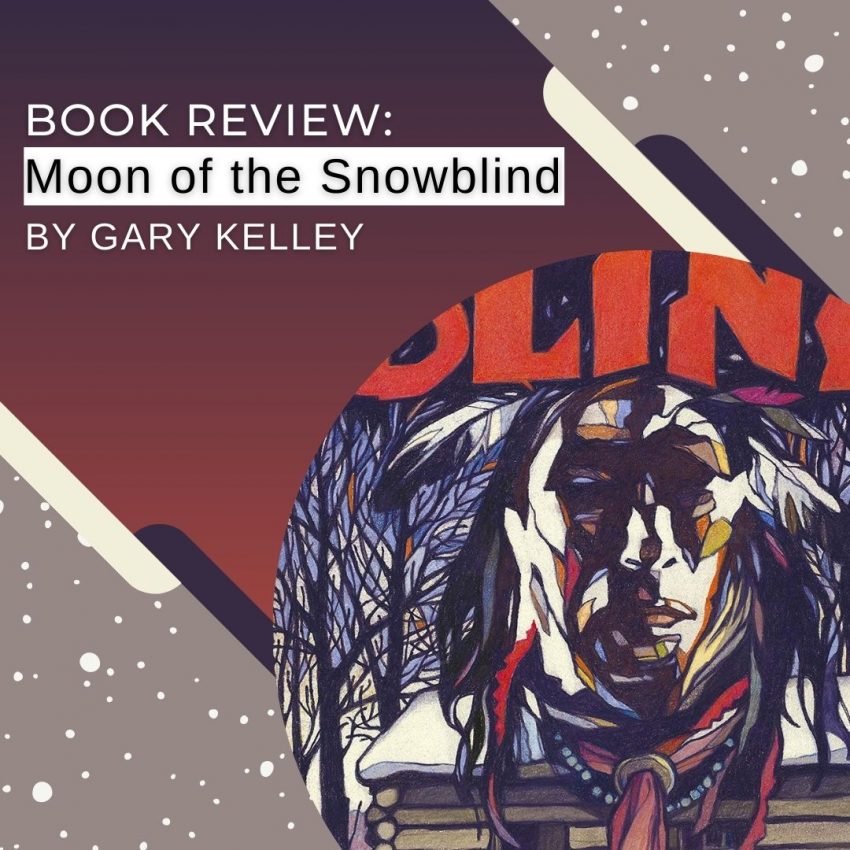 I’ve never read a graphic novel—until now. I was lured into reading Moon of the Snowblind by Gary Kelley because of its enticing cover, captivating title, and its compelling and tragic topic. Published on the one hundred sixty-fourth anniversary of that topic, Moon of the Snowblind is an illustrated portrayal of the Spirit Lake Massacre, an event that resulted in the death of more than forty settler-colonialists at the hands of a traditional band of Wahpekute Dakota. As the author of Grace at Spirit Lake, a historical novel that tells the story of the Spirit Lake Massacre and its aftermath, I was curious to see how another author chose to convey these events and their complicated history.

The novel opens with two quotes: one attributed to Spotted Tail, the Brulé Lakota tribal chief and the other attributed to Black Elk, the Oglala Lakota medicine man. The quotes, and their corresponding illustrations, express the ineludible nature and tragic impact of settler-colonialism on Native American peoples. It seems appropriate for the story that follows.

After a brief portrayal of the murder the Dakota leader Sidomindota and his family by the white horse trader Henry Lott, the novel centers upon the experience of the Gardners, a New York family compelled by Manifest Destiny to move west and resettle on the vast open prairies of Iowa. Through an array of exposition, dialogue, and black and white illustrations, the narrative shows the hardships and challenges, the joys and triumphs, of settler life while also hinting at the looming conflict ahead. Once winter arrives, survival becomes uncertain—for settler and Native alike.

The story progresses chronologically, using the Dakota and English months as chapter headings. It shifts back-and-forth between the Dakota and white experience, but focuses mainly on the massacre of the settlers at Spirit and Okoboji lakes and the harrowing captivity of young Abbie Gardner at the hands of the Wahpekute. It ends with the rescue of Abbie and the reconciliation of the white and Dakota communities. But it does not end without reminding readers of the tragic impacts westward expansion would continue to have on Native populations, most notably the hanging of 38 Dakota in Mankato in December 1862.

I am impressed with Gary Kelley’s Moon of the Snowblind. The illustrations are both engaging and keenly expressive while the story is informative and affecting. Some may take issue with the portrayal of one side or the other, believing perhaps it lacks objectivity. But at a time when the world has become acutely aware of our narrow representation of history, I believe it’s appropriate to question the stories we’re being told. It’s clear that Kelley knows his history and he’s found a unique and artistic way to share it. Let the readers glean what they can, add it to their own experience, and think critically about how our history will continue being told.

Colin Mustful is an independent historian, author, and publisher. His work, which includes four historical novels, focusses on the tumultuous and complicated periods of settler-colonialism and Native displacement in American history. He has a Master of Arts degree in history and a Master of Fine Arts degree in creative writing. He is the founder and editor of History Through Fiction, an independent press that publishes compelling historical novels that are based on real events and people.