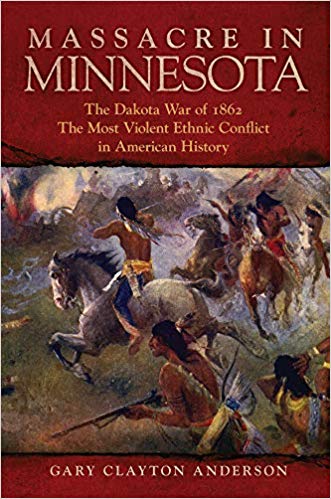 One hundred and fifty eight years ago, war tore through the Minnesota River valley forever altering the social, cultural, and historical landscape of a once quaint frontier community. The U.S. – Dakota War of 1862 was a tragic, watershed event that has left behind a changing narrative that historians still grapple with today.

In the 1980s, historian Gary Clayton Anderson confronted the enigmatic historical event with a series of books. The first was Kinsmen of Another Kind (1984), a finalist for the Pulitzer Prize, followed by Little Crow: Spokesman for the Sioux (1986), and finally, Through Dakota Eyes: Narrative Accounts of the Minnesota Indian War of 1862 (1988). Now, more than thirty years later, the accomplished historian has returned to the 1862 war with his new book, Massacre in Minnesota: The Dakota War of 1862, the Most Violent Ethnic Conflict in American History.

One of the most intriguing elements of the U.S. – Dakota War is its ever-changing name. Throughout much of the 20th century it was known as the Sioux Uprising, a now clear but still debated misnomer because of both the words “Sioux” and “Uprising.” Anderson shows that he is not immune to changing perspectives while also wading into the controversial waters by calling the 1862 event a “massacre” a “war” and an “ethnic conflict” all in the same title. Also, the cover image he chose is titled, The Siege of New Ulm, a 1902 painting by August Schwabe that could easily provoke the ire of some readers in his audience for its single-minded portrayal of Dakota soldiers on the attack.

“Never had an American frontier community been more closely aligned in supporting a policy approaching genocide than in Minnesota in the late fall of 1862.”

Despite the apprehension the title and cover image may evoke, after reading Anderson’s exhaustive historical account, I believe it rises above any form of subjective, limited account that marks much of the historical record on the U.S. – Dakota War. Like any good historian, Anderson combs through multitudes of accounts and records while laboring over every detail of the war and its aftermath. Also, Anderson appropriately provides much needed context of the events before and during the war in order to understand exactly why tragedy struck.

One of the most impressive elements of Anderson’s new book, is his boldness to take on every aspect of the U.S. – Dakota War no matter how or if those elements have been considered by previous historians. This comes across most clearly in the chapter titled “Captives and the “Fate Worse Than Death.”” In it, the historian examines the role of sexual abuse during the war. Anderson readily admits that most historians have ignored the subject, rather than get mired in something that is so difficult to sort out fact from fiction. Women at the time, for various reasons, were unwilling to talk openly about their treatment as captives which makes it challenging to draw any conclusions about the true nature of captivity. But Anderson proceeds anyway, examining the records, considering social context, and drawing reasonable conclusions about what was meant by “the fate worse than death.”

In the same way, Anderson delves into other elements of the war by taking apart and reconstructing the sources in a way that thoroughly and objectivity provides realistic conclusions. Take, for instance, the Treaties of Traverse des Sioux and Mendota in which the Dakota sold their lands west of the Mississippi River in exchange for a reservation along the Minnesota River. Although it would be easy to say that the Dakota were cheated out of hundreds of thousands of dollars and forced to give up their traditions and homeland, Anderson carefully examines the payment and its aftermath to show readers exactly what happened. Citing numerous sources, the author provides real data—to the penny—about what money was exchanged, when, and to whom. He also revisits the roles of men like Henry Sibley, Alexander Ramsey, and Joseph R. Brown. Finally, he does not spare the settlers who took advantage of the situation by burning Dakota villages prior to ratification of the treaty and who also called upon “settler sovereignty” to take land as they pleased as if they were entitled.

“The entire debt scenario was a massive fabrication.”

The Dakota were not blameless in the events of 1862. By scouring the records, Anderson takes on the role of the Dakota while also providing accurate details about the deaths and captivity of settlers. While many accounts of the attacks have been aggregated over time, Anderson puts forth the effort to analyze those accounts and determine the number of innocent civilians killed and through what means. He provides numbers and details that allow readers to know and understand the exact sequence of the battles and who was involved. He also looks at the nature of warfare among the Dakota, the factionalism between the akacita (soldier’s lodge) and chiefs, the factionalism between the Mdewakanton and other bands, and the portrayal and legacy of Little Crow.

Many Minnesotans have learned that thirty-eight Dakota men were hanged in Mankato on December 26, 1862, in what is the largest mass execution in United States history. But for those who still want to know why, or for those who still question the truth behind the history they already learned, I cannot more highly recommend Gary Clayton Anderson’s Massacre in Minnesota: The Dakota War of 1862, the Most Violent Ethnic Conflict in American History. The book, I believe, represents the pinnacle of historical responsibility. Anderson does not rely on previous accounts to regurgitate a biased narrative. Nor does he shy away from controversial topics that could expose his work to criticism. Anderson, through exhaustive research, uses the tools available to him to completely deconstruct the U.S. – Dakota War of 1862 and then puts it back together again in an objective manner cultivating truth over exaggeration. The result can be painful for readers to see—genocide, corruption, rape—but it was all a part of Minnesota history. As Anderson points out, “accounts that are designed to vilify or honor the actions of men and women who are undeserving of either only compound the problem associated with facing our past.” Instead, we must come to know our history, even if consensus is impossible, otherwise we are indeed doomed to repeat it.