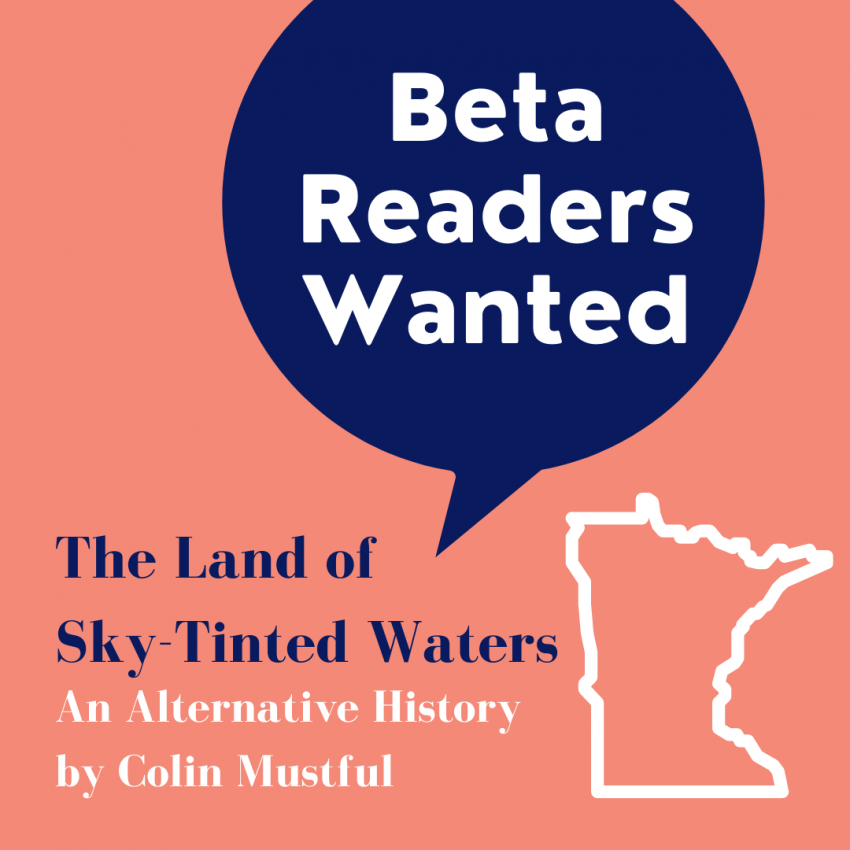 I am looking for Beta Readers for my current Work-in-Progress, an alternative history novel titled, The Land of Sky-Tinted Waters.

This novel represents a departure from my previous publications. Rather than fictionalize history while leaning strongly toward known facts, I have created a complete reimagining of history that leans strongly toward character and setting. The novel is based on the events of the U.S. – Dakota War of 1862, but relies on two fictional main characters in order to look deeply at the lives of those who were affected by the war and its political and social context. Ultimately, rather than report what happened, I have created an alternative history that asks readers to look at the U.S. – Dakota War from a new perspective, and to question what it means for all of us today.

But…the novel is not ready for publication and I need your help to make it better! If you’re interested in reading an electronic version (Microsoft Word or PDF) of the current manuscript and offering feedback, please email me at mnauthor@colinmustful.com.  I would like all feedback returned no later than December 31, 2020.

What is a Beta Reader?

A beta reader is someone who reads an unpublished manuscript and provides honest feedback to the author.

What’s the deadline for feedback?

If you agree to beta read, please return your feedback no later than December 31, 2020.

How will I know what feedback to give?

I want your overall opinion of the novel, but I will also include specific questions throughout the manuscript for you to consider.

What’s in it for me, the beta reader?

A lot! You get to be part of shaping a story with an important and valuable message. You get to read the story well in advance of most readers. And I will include your name in the Acknowledgements of the finished and published product.

What happens after I’ve finished reading and emailed my feedback?

I will be scheduling an individual interview with each beta reader so that I can get direct feedback and ask more specific questions about your thoughts on character, plot, setting, and so on.