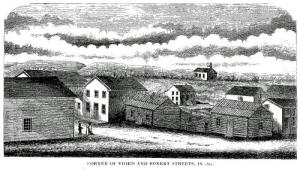 In the Spring of 1849, Minnesota became a territory.  At that time, St. Paul was little more than a hamlet with barked roofed cabins.  But following the announcement that Minnesota was to become a territory, there came hundreds of immigrants.  Building began at a feverish pace to try and make room for all of the newcomers.  As stated in the Pioneer in April of 1849, “A description of the village now would not answer for a month hence – such is the rapidity of building, and the miraculous resurrection of every description of domiciles.  Piles of lumber and building materials lie scattered everywhere in admirable confusion.”  The author E.S. Seymour gives his impression of St. Paul upon landing there on May 17, 1849:

“Its new frame buildings, glistening with the reflection of the rising sun, imparted to it an air of neatness and prosperity.  On arriving at the wharf, a numerous throng of citizens and strangers came rushing down the hill to welcome our arrival.  I grasped the hand of many an acquaintance, whom I unexpectedly found here.  Everything here appeared to be on the high pressure principle.  A dwelling house for a family could not be rented.  The only hotel was small, and full to overflowing.  Several boarding houses were very much thronged.  Many families were living in shanties, made of rough boards, fastened to posts driven in the ground, such as two men could construct in one day.  It was said that about 80 men lodged in a barn belonging to Rice’s new hotel, which was not yet completed.  Two families occupied tents while I was there.  While traveling in Minnesota, I mad my headquarters at St. Paul, where I occasionally tarried a day or two at a boarding house, consisting of one room, about 16 feet square, in which 16 persons, including men, women and children contrived to lodge.  The remaining boarders – a half-dozen or so – found lodgings in a neighbor’s garret; this tenement rented for $12 per month.  The roof was so leaky that, during the frequent rains that prevailed at that time, one would often wake up on the night and find the water pouring down in a stream on his face, or some part of his person.”

Source:  Williams, J. Fletcher.  A History of the City of Saint Paul, and of the County of Ramsey, Minnesota.  St Paul:  Minnesota Historical Society, 1876.