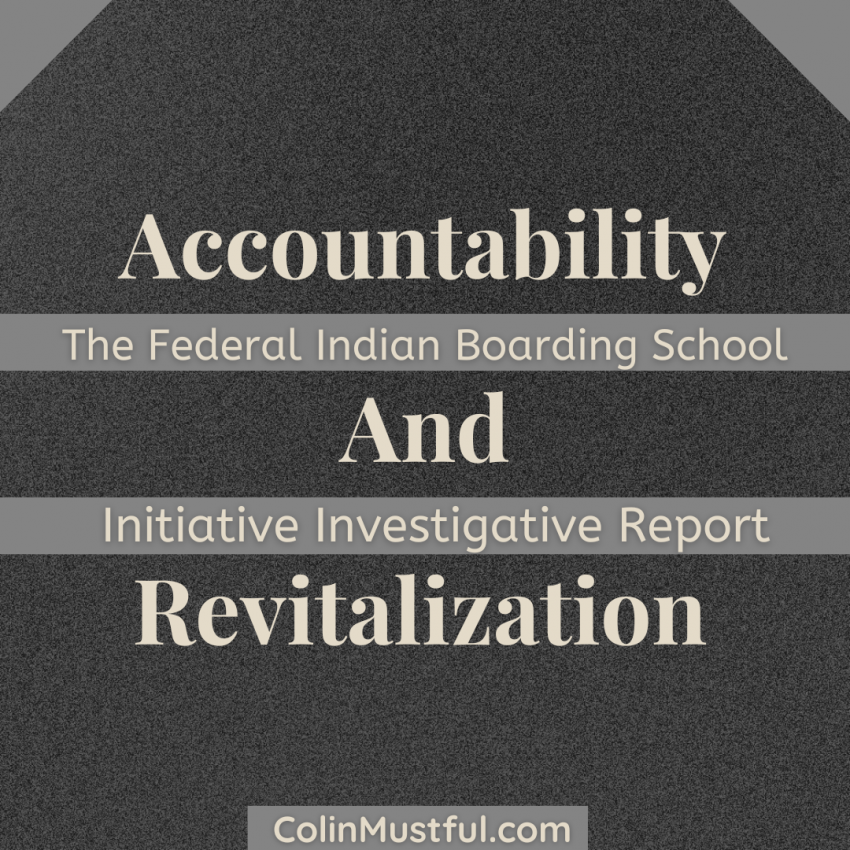 It’s no secret that throughout the history of the United States, Federal Indian policy, in most cases, has had devastating, deadly, and long-lasting effects on Native American populations. Some policies were made out of ignorance or expediency, others out of outright greed and malice. One such policy that was unequivocally brutal was the establishment of Indian Boarding Schools which was part of a larger effort to forcibly acculturate Native peoples into the dominant white American society.

The devastation wrought on Native communities, especially children, was recently acknowledged by the U.S. Department of the Interior upon publishing the first volume of the Federal Indian Boarding School Initiative Investigative Report. The 100-page report is both objectively factual and subjectively damning. It states that “between 1819 and 1969, the United States operated or supported 408 boarding schools across 37 states, including 21 schools in Alaska and 7 schools in Hawaii.” The report further acknowledges that it is “based on examination of records under its control” meaning that there are numerous institutions “including Indian day schools, sanitariums, asylums, orphanages, and stand-alone dormitories that may have [been] involved [in the] education” of Native American children but were not under federal control.

Among its findings, the report “has identified approximately 53 marked or unmarked burial sites” across the Federal Indian boarding school system and suggests that, upon further investigation, the Department “will reveal the approximate number of Indian children who died at Federal Indian boarding schools to be in the thousands or tens of thousands.” Overall, the report concludes that the Indian boarding school system used “militarized and identity-alteration methodologies to assimilate” Native American children through education. Some methods of forced acculturation include forcing Indigenous children to change their names, cut their hair, eliminate their languages, religions, and cultural practices, and perform manual labor. All of this, the report acknowledges, was done with the broader goal of intentionally dispossessing Native peoples of their land while avoiding war.

One of the most important elements of the report is the accountability the Department accepts for the damaging assimilation policies of the past. It states, “The Department must fully account for its role in this effort and renounce forced assimilation of Indian Tribes, Alaska Native Villages, and the Native Hawaiian Community as a legitimate policy objective.” And, the report takes accountability further by promising actions aimed at restoring and revitalizing Native communities, language, and culture. First and foremost, the Department articulates their commitment to complete a full investigation of the Federal Indian Boarding School System while encouraging non-federal institutions related to the education of Indian children to submit their records to the Department. The report goes on to list a number of specific actions the Department will take to support Native communities. Some examples include advancing Native language revitalization, developing a Federal repository of records involving the Federal boarding school system, documenting the Federal Indian boarding school attendee experience, and supporting the protection, preservation, reclamation, and co-management of sites across the Federal Indian boarding school system.

While this is a remarkable step forward for a government that has marginalized and destroyed Native people and cultures for centuries, it should be noted that similar reports have been published in the past. One such report, published in 1928 and titled The Problem With Indian Administration, determined that Federal Indian policy had been detrimental to Native Americans while calling the system of Indian boarding schools “grossly inadequate.” Then, in 1969, Senate Report 91-501, commonly known as the Kennedy Report, declared Indian education a “national tragedy” and said “the dominant policy of the federal government toward the American Indian has been one of coercive assimilation” and the policy “has had disastrous effects on the education of Indian children.”

It would be impossible to account for all the wrongs done to Native communities through Federal Indian policy over the centuries, but the Federal Indian Boarding School Initiative Investigative Report is an important step toward acknowledging those wrongs and committing to their reversal. While such acknowledgment has been done in reports of the past, those reports did lead to valuable advancements in Native governance such as the Indian Reorganization Act of 1934, and the 1975 Indian Self-Determination and Education Assistance Act. As the Department of the Interior’s investigation continues, it will reveal more damning evidence, but will also lead to positive change for millions of Native American peoples so that they and their communities can heal, thrive, and prosper.