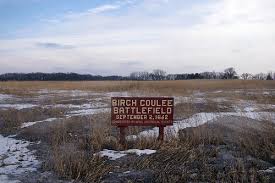 The Birch Coulee Battlefield is not much to look at.  It lays just north of the Minnesota River along the undulating prairie scattered with small knolls and various groves.  This was the campsite chosen by Joseph R. Brown and 170 U.S. soldiers sent from Fort Ridgely on burial detail.  It was chosen for its comfort and convenience, not for its defensibility.  The soldiers believed there was no threat from attack.  Joseph R. Brown himself stated, “don’t worry about Indians, there are none within one hundred miles.  You’re just as safe as if you were home in your own beds!”  He was wrong.  On the morning of September 2, 1862, the burial detail at Birch Coulee was attacked by over 200 Dakota warriors.  The siege lasted all day and into the night.  The soldiers were trapped and helpless as they waited and hoped upon reinforcements to arrive.  While describing that long night, Private James J. Egan called it “a night of black despair,” and wrote that, “the agony we suffered, expecting every moment we would be rushed upon, through that long, long night, is indescribable.”

Below is an excerpt from this event in the novel, Thy Eternal Summer.

The Sioux crawled ever closer.  They did so with amazing stealth without causing the grass to rustle or a branch to break.  As we grew closer, I could see that the camp was much larger than the scouts had originally reported.  There were many tents, tens of wagons which formed a half circle, and approximately ninety horses around the outside.  I estimated their numbers at one hundred fifty men.  Suddenly a shot rang out.  A guard had seen movement and fired.  Like rabbits from a hole the Indians sprang from their lowered positions and fired upon the pickets.  Immediately the soldiers retreated as fast as they could.  I did not know what I should do so I lifted my rifle to take aim, but before I even had it raised, the Indians were yelling and charging on the camp.  The Sioux opened up a ravenous fire.  Within minutes all of the horses that had surrounded the camp had fallen dead filled with numerous bullets.  The soldiers tried to form a skirmish line, but as they stood they became easy targets and one by one they too fell dead to the earth.  They quickly learned that they must lay low and among the ceaseless rapture of gunfire I heard one brave officer yell out, “Lay on your bellies and shoot!”